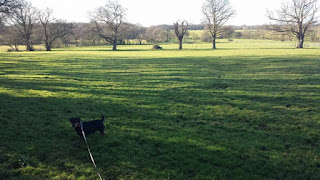 I had a rather restless night. I lay awake for much of the night listening to the heavy rain. What sleep I did get was troubled by nightmares of what might have been.

Over brekkie I saw that the wherigo I submitted for publication yesterday had gone live, and then I had a look at my current wheri-project. Yesterday I started working on a wherigo I'd first started several months ago. Last night I managed to completely stuff it up. Howeverr this morning it appears that all I've done is to have wiped out the four houurs work I did yesterday. It could have been a lot worse.
I then had a look-see on-line. Facebook is heaving with all sorts of disparaging posts about what might happen if Donald Trump is elected to the White House. Do people realise that UK residents don't get a vote in the US Presidential elections? Reading social media I don't think they do.

"Furry Face TM" was keen to go out so we drove down to Bethersden. As we drove I was very conscious that there was a large red lorry not ten yards behind me the entire way. As I sped up so did that van, as I slowed down so did that van. At all times keeping a dangerously small distance between us. Eventually I lost my tail when I turned into Bethersden; I was amazed to see the van was an official Calor Gas one.
We parked up, and after my dog had tried to pick a fight with a lollipop-lady we went for a little walk. Regular readers of this drivel may recall that last September I put out a series of thirty-eight geocaches round Bethersden. Thirty-four of them have never caused any problems; however caches #3 to #6 have needed quite a bit of maintenance. Today we went out to have a look-see at problems reported on #3. Well... not so much problems as the thing actually being missing.
Having stomped through some rather swampy fields we found that it actually had gone missing. In retrospect putting it under a bridge was a silly thing to have done. It probably got washed away in the recent floods. So I put out a replacement at the base of a nearby tree and we stomped back through the flooeded fields to the car.
We stopped off on the way to replace the paper log of a roadside cache. The thing had been recorded as wet; it was actually missing. So I replaced the lot.

Once back and parked up I was conscious that for all that we were both covered in mud we hadn't actually walked very far. So we did a quick circuit of the park before coming home. And once home we both had showers. One of us was muddier than the other. I can remember having to fight with a previous dog at bath time. I would have to pin the dog down whilst "er indoors TM" scrubbed. "Furry Face TM" is very good at bath time. He lifts his legs in turn when I want to hose them; he never fights or struggles.
I then put my muddy clothes (and the dog towel) into wash whilst I had a spot of lunch, and then took myself off to bed for the afternoon.

I got up after three hours kip, and spent the afternoon repairing my latestt wheri-project after yesterday's stuff up. "er indoors TM" came home, boiled up a rather good bit of dinner.... and I'm off to the night shift now.