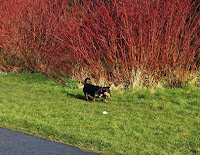 I slept like a log last night; finally being woken by a fidgetting dog. I say "fidgetting"; he was thrashing about so much I couldn't help but wonder if he was having a nightmare or a fit. But just as I was turning to see to him he jumped off the bed. I followed him to his basket from where he looked at me, wagged his tail and went to sleep.
After my shave I sat on the sofa for brekkie; he jumped up and sat with me. He seemed fine. After a little Googling I don't think he had a fit, but I can't stop worrying about the silly mutt. Did I ever mention that I never wanted a dog?

I then took the dog that I never wanted for his morning walk round the park. As we walked I couldn't help but notice the cars were covered in what looked like melted and re-frozen snow; as did the footpaths. Had it snowed overnight?
As we walked we met a chap with a couple of larger dogs walking toward us. We've met this bloke (and dogs) before from time to time without serious incident but today was different. Fudge pushed right up against me and started whimpering in fear. Not really knowing what else to do I picked him up and carried him past the bigger dogs. He growled half-heartedly at them as they trotted past. I wonder what that was all about.
We carried on round the park and saw a jogger. In the past I've mentioned that they generally never look happy. This one didn't'; he looked as though he was sobbing. Poor chap.

Once home "Furry Face TM" had his brekkie then I brushed his teeth. Last week I mentioned how good he is at bathtime. Bathing him is easy; he is *so* co-operative. Brushing teeth is a different matter. He wasn't keen at all. I shall have to enlist the assistance of "er indoors TM" to pin him down for the next teeth-brushing session.
The vet says we should start brushing his teeth as a preventative measure. Mind you the vet also says he is seriously overweight...

With a little time on my hands I spent a few minutes organising a couple of geo-walks for next week. It is coming up to the end of the year for booking annual leave and if I don't take time off I lose it. Also I have a couple of geo-calendar days next week. I need to find a concealed sandwich box or two on those days, my dog will need a walk, and it is always good to meet up with friends.
If anyone would like to come for a short (for me) walk next week on Monday or Friday you can see the plans by clicking here and clicking here.

And then off to work for the late shift. And as is so often the way when on the late shift pretty much everything of note in my day happened before 11am.
Mind you Gotham is on later...