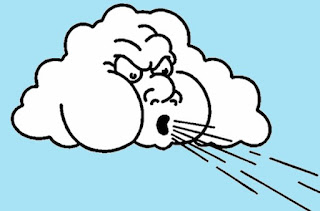 I woke raring to go at 1am. I got back to sleep, but was then plagued with dreams of having to protect random small children from an authoritarian church in a post-apocalyptic nightmare. I eventually rescued the children by bashing the head of of the Archbishop of Canterbury against a brick wall (when no one was looking), and it was then that I woke up in a sweat.
I got up and over brekkie watched "Dad's Army" which the SkyPlus box had thoughtfully recorded for me. In today's episode the bank had been bombed. It made for gentle entertainment until it was time to go to work.

The weather forecast for this morning hadn't been good; as I drove the pundits were telling horror tales of wind speeds of over one hundred miles an hour in the Solent. I don't know how fast the wind was going here in Kent, but it was an effort to walk against it.
I got about half way to work and had to turn round. The A28 was blocked by a fallen tree. I was grateful for sat-nav (once I got a signal) to take me through the back roads, but I found myself taking a very circuitous route to work along some rather narrow country lanes. These lanes also being strewn with fallen branches and small trees.

I got to work and did my bit. To be honest what with the wind having been so strong today I would rather have worked today and have the time off when it suits me rather than having had the day off and being sat at home sulking about how bad the weather was.
As the day wore on so the wind abated somewhat and the day became brighter. Until the stroke of going home time when the heavens opened and I got soaked walking trom the door to my car. Ironically the rain had stopped by the time I got home.

I came home to find "er indoors TM" had been staging a tidy-up. At the sight of me "Furry Face TM" got very over-excited. He associates my coming home with walkies time. So not wishing to disappoint him we tookk him round the park.
It was still rather windy and some chap was playing with a power kite in the park. Personally I wouldn't play with one in such a strong wind, or quite so close to the trees. I could have interfered, but I thought it best for him to learn these lessons for himself.

Once home we haad somehing of a lazy evening in front of the telly. On the one hand I would have liked to have done more with the evening; on the other hand I've had a busy few days. A little slob-about is never a bad thing...