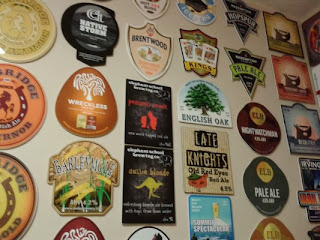 I had a worse night than usual; and that is saying something. I woke at silly o’clock feeling ill, and didn’t get any better as the night wore on. I finally gave up trying to sleep and was watching telly at 5am.

I was walking my dog by 7.30am; I was so bored. It was a very cold morning. We went through the town centre as I had a parcel to collect. I took “Furry Face TM “ into the collection office with me; there were no signs saying I couldn’t. And with dog walked we came home again where I spent an hour or so doing laundry and homework.

The plan had been to do something of a road trip today, but I wasn’t feeling one hundred per cent, and as I was debating whether or not to stick with the road trip plan the phone beeped. Cheryl had a driving lesson planned and Lacey was off school with the same lurgy I seem to have. Would I sit with her during the driving lesson? Of course! Fudge and I wnet round, and whilst driving lessons got driven, Lacey and I watched movies. “Thumbelina” and “The Cat in the Hat”. And after two movies we had bacon sarnies. Very tasty.

I then came home and spent an hour or so attacking the ironing whilst watching a documentary about John Le Mesurier. I’m basically a nosey person, and I do like biographies. And with the ironing done the Rear Admiral arrived and we set off to Folkestone where we met Steve at the Firkin for a pint of ale. It was a very nice pint, so we were cheeky and had another. And another.
Things got very vague…