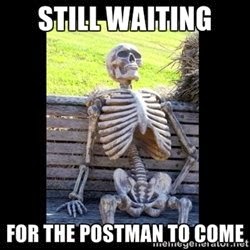 For no reason that I could possibly fathom I had a terrible night's sleep. I would have thought that copious amounts of ale would have knocked me out. But I kept waking following nighmares in which I felt (very vividly) that I was falling. I wonder what that was all about...
I had the shock of my life as I went to shave. Feeling rather under the weather meant that I had the teensiest bit of a thick head. So I'd not really taken a lot of notice about how my head felt. I looked in the mirror to see it was completely bald. How did I forget that? I shaved. I had thought about doing Mo-Vember again, but decided against it. Last year I raised a couple of hundred pounds, but I *really* don't like having a furry face. One of those in the household is quite enough. Mind you many people have asked me if I was doing Mo-Vember this year; and funnily enough the vast majority of people who expressed extreme disappontment that I wasn't were people who never actually sponsored me last time. But if any of my loyal readers are fans of the face fungus, "The Man with No Alias (patent pending)" is growing a tash that can be sponsored by clicking here.

"Furry Face TM" was particularly quiet over brekkie. I also noticed that his ears seemed rather hot. He made himself comfortable on the sofa next to me and didn't stir when er indoors TM" came down. I imediately started worrying about the silly little dog.
I took "Furry Face TM" out for a walk and he immediately perked up. There was a slight drizzle when we got to the park. I had a plan to take a walk out past Singleton Lake, but the rain got heavier as we got to the ford (Ashford has a ford, you know), so we came back. And the rain eased up. For want of something to do I took a few videos of "Furry Face TM" in the park. Before I could stop him he was rolling in filth. I thought I’d video that, bat rather than just rolling in it, he started to eat it. I drew the line there, and took him home for a bath.

With a bathed dog I spent an hour doing homework, then got cross. On Wednesday I’d had a text saying that a delivery company had tried to deliver a parcel and failed. When did I want redelivery? I had to text “1” for yesterday, or “2” for today. I selected today. I then looked on the website to find the parcel was still in their office. I phoned to get through to someone in Maidstone who was utterly disinterested. She refused point-blank to give me the phone number of the delivery depot but grudgingly gave me their address. With that I had their phone number in seconds and I phoned them up. Apparently they could not post the parcel through the letterbox because that would be “fraudulent”. Apparently. I asked if they knew what the word meant, but they would not answer. Obviously they didn't. they did say that they could deliver it some time next week, or I could collect it. From Maidstone. A fifty-mile round trip. As I set off I received a text from the delivery company’s useless automated system telling me it hadn’t been possible to process my request.

I eventually got to their office and got my parcel. I told “young spotty” on the counter how useless his company was and just as I walked back to my car I thought I’d try my geo-app to see if there were any nearby geocaches. There was one not two hundred yards away. So I thought I’d find it. I did. Call me an old traditionalist, but there should be more to a cache than a soggy bit of paper in a plastic bag. Mind you the chap charged with looking after this geocache hasn’t logged on to the caching website for two years so I suspect it will only be a matter of time till this one gets archived.

As I drove home I saw that petrol was two pence per litre cheaper than in Canterbury. And that is quite cheap as petrol goes, so I filled the car. And then came home, terrorised the dog for a few minutes, and set about the household accounts. There’s no denying they could be a whole lot worse. I just wish they were a little bit better. There was a moment’s panic when I saw that no payment had been made for the house insurance. But on phoning it turns out that I only make ten annual payments for that; not twelve. That was an unexpected bonus.
I then did the last installment of my dino-course, and then slept for much of the rest of the afternoon. I *really* hate that. Why do I sleep when I have stuff to do and am wide awake most of the night?