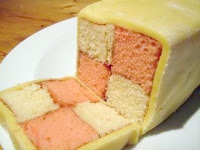 Regular readers of this drivel will realise that I do the occasional oil painting. Regular readers of this drivel will also know that I make no secret that my inspiration is the late great Bob Ross. Having done a series link for his show on the Sky Plus box I have several dozen of his shows recorded to watch at my leisure. I usually watch at least one show every morning over a spot of brekkie. Bob always makes great show of how to create the illusion of mist in paintings; it's a skill I'm slowly acquiring. A lot of the problem I have with creating mists in my paintings is that I don't actually see mist that often to know what the stuff looks like.
I was in raptures as I got driven to Canterbury this morning. We drove the scenic route through the village of Wye and through several country lanes. As we went there was mist and fog everywhere. It was so pretty, and it was a lesson on landscape as well. If only every day could start so well.

Unfortunately the day failed to live up to its initial promise. I'd not slept well last night (there's a surprise!), and after a colleague told me about her three year old son asking for "bat and bird cake", I started remembering some of the antics of "Daddies Little Angel TM" and "My Boy TM" from twenty years ago, and I found myself getting quite soppy. Fortunately for me, no one else noticed. I soon got over it. I wonder what that was all about?
And so home again - no mists this evening, but it was quite good coming home in the daylight. And once home we did a catalogue drop. If any of my loyal readers would like the opportunity to purchase some rather wonderful household products at bargain basement prices, just let me know.

My mobile rang. it was Feargal from Vodafone. What network was my mobile phone with? Normally I'd tell cold callers to knack off, but they too are fighting for the buck (just like me). So I answered him. How much was I paying? What phone did I have? And all of a sudden he was chattering on about the new phone that I would be buying from his company at five pounds a month more than I'm paying at the moment for what I would consider to be a poorer phone. Poor Feargal seemed rather miffed when I told him that I wouldn't be taking him up on his offer. Or not so much miffed as affronted. To keep him sweet I suggested he contacted me when my phone contract was up for renewal in a few months time.
One of they joys in writing a blog is that I can find out all sorts of petty details; my contract will be up for renewal on 2 November. I thought it would be sooner than that...