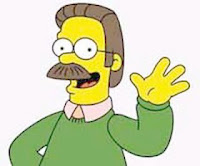 Yesterday I mentioned that I'd sexed up the cover letter that I send out with my job applications, and that I'd launched the thing into the Internet. This afternoon it seemed to have worked. I had a phone call from a recruitment agency. We chatted - the chap from the agency was impressed with me. He liked what I was saying. His only concern was that what I was saying wasn't conveyed by my C.V. Had I thought of having my C.V. reviewed by a professional C.V. writer? And before I knew where I was, the chap was asking how I would like to pay. He can go whistle.

And so home. Where it was obvious we'd had a visitor. All the lights were on, the telly was blaring, there was crockery and half-eaten food as far as the eye could see, and the floor was awash with dog biscuits. Just as I started to clear the mess, "Daddies Little Angel TM" burst through the door, complete with grand-dog Sid. She muttered something about tidying up, vanished upstairs for ten minutes and then said she had to go.

I walked up the road with her, partly to exchange insults with her chauffeur, and partly because I was going that way anyway. Mid-week is leafleting time; I had my sights set on Francis Road, and I delivered catalogues to the masses. Or most of the masses. I didn't bother with houses that had signs up saying that they don't want circulars. I had an interesting conversation with one of the residents. Having had one of our catalogues popped through his door, he stood in his garden and hollered down the road for me to come back and take the thing away. I had to stop myself from laughing out loud. The bloke looked just like Ned Flanders from the Simpsons, was trying to appear suave and sophisticated, and was coming over as some sort of half-wit. I politely asked if he didn't want the catalogue. He attempted to look down his nose at it, but merely looked like he was inspecting his moustache for fleas. I took the catalogue, and in parting I mentioned that it was a shame he didn't want to peruse the thing because he looked like he could use a bargain. I managed to keep a respectful tone, and I managed not to laugh at him as he began to bluster as I walked off.

If any of my loyal readers would like to avail themselves of some serious bargains, you might look no further than at the top of this blog entry. There's a box on the right, blue in colour, marked "Stuff for Sale". I may well be adding to my commercial ventures over the next few weeks, but there's one or two bargains there to be getting on with for the time being...
Posted by Manky Badger at 8:11 pm