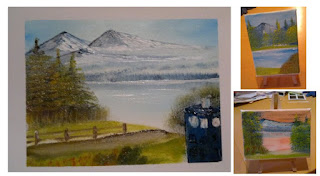 Bearing in mind how glorious it was last Sunday, I woke this morning with all sorts of plans for what we might do with the day. So much for my plans. Whilst the rain wasn't actually torrential, it was certainly bad enough to put the kibosh on any plans which involved going out of the house this morning.
So over brekkie I spent a few minutes playing on-line scrabble, then spent more time job hunting. Only a couple of hours today. Will anything come of it? I must admit I'm becoming rather disillusioned about the whole "change of career" idea. I've been applying for so many jobs for so long, and so far there's been very little to show for my efforts. I don''t actually dislike my job, and I work with a really good bunch of people. But there's no denying that I spend most of every day absolutely bored rigid.
Mind you, I did get cross with some of the web sites I used for applications today. Why do web site designers think that it's worth having all sorts of bells and whistles on a web site when all that they do is make a web page take five minutes to load when a plain text version would achieve the same result in five seconds.

We still had some catalogues to collect, so despite the rain we set off round the local roads to see if anyone wanted to buy our wares. One or two people were up for a bargain. Not as many as I would have hoped, but more than I might have expected. We came home and dried off, and I sold another painting - that makes five in total. And then I got my paints out and did some more painting. Badger Original Landscapes has developed two more bespoke lines. I now do mini canvases on easels; small paintings which are five inches by seven inches. Or seven inches by five inches, depending on the customer's preference. And the second line is something rather unique - "Tardis-scapes". "Tardis-scapes" will be just like any other landscape, but with a Tardis in there somewhere. I'm hoping to cash in on the sci-fi enthusiast market. I'm not entirely happy with how the first one has turned out, but then I am rarely happy with how any of my paintings ever turn out.

And then I went to the loo for the umpteenth time. I'm not blaming Friday's chilli or yesterday's fry-up. But something has upset my guts. The rumbling can be heard a hundred yards away, and the flappy-woof-woofs are quite rancid. I wonder what has caused the gastric distress - I wish I knew because I wouldn't eat whatever it was again...