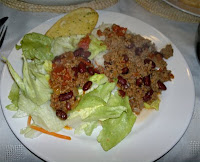 Regular readers of this drivel must have realised that there are several things about this life which boil my piss. Today I’m going to rant about my duvet.
Every night when I clamber into my pit I arrange the duvet neatly and tidily over the bed. When it’s time to get up in the morning I can’t actually get out of said pit. Instead I have to untangle myself from the miles of duvet which have migrated in my direction overnight, wrapped themselves around me, and have attempted to smother me. ‘er indoors TM has maybe six inches of  duvet cover, and I have several yards of the thing round my arms, up the wall, over the floor  - all in my way as I’m trying to get up. How does it get there? Bring back blankets – you can’t go wrong with a blanket.
To work (dull). Yesterday I mentioned that I was planning to shout “Woo Hoo” as the bearer of the Olympic torch will run past my house with the thing in a few months’ time. So today I put in for the day off. It looks like quite a few other people have had the same idea. Oh well – if I don’t get the leave I might just have more reason to sulk about the job. And I don’t really need any more of that.
Yesterday I mentioned that I’d applied for some jobs. Today one of the agencies rang back. They seemed very keen about my chances with one of the positions I’d applied for. Here’s hoping.
And a CV writing company phoned. They’d offered a free appraisal of my C.V., so I’d sent it to them. They wittered on down the phone for quite some time without actually saying anything; then announced that their next step would cost me over three hundred quid. I told them it wouldn’t, and hung up.
And being Tuesday the clans gathered. This time in Cheriton. We’d not been to Paul’s before, and he did us proud. An excellent chilli, and we’d not laughed so much in ages.
Really must do it again….
Posted by Manky Badger at 6:42 am