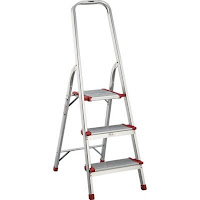 Here’s a thought. On the drive to work this morning I heard the news that sales of casserole dishes and stepladders are down. Seriously down. So seriously down that their sales have been removed from the official figures used by the government to measure sales of things like (but now not including) casserole dishes and stepladders.
There is speculation that today’s houses have lower ceilings and so do not require the use of stepladders. I wondered if, with the lower ceilings, one might obtain the same result one used to get from a stepladder by merely standing on a casserole dish. However that would not explain why sales of casserole dishes are down. Perhaps people aren’t eating casseroles any more because it’s not hygienic to use a dish that’s been used as a stepladder?

And so on with the second of my extended working days. My colleagues are watching my progress with this experiment with interest; some are very keen to work longer days (as I am doing this week); others are dead against the idea. For myself I am (so far) quite keen on the idea. Getting to Canterbury for 7.45am means that I miss much of the traffic that I encounter when I would otherwise leave Ashford at 7.30am. And leaving Canterbury after 8pm means that again the roads are clear. Fewer journeys with much less starting and stopping must be good for the car’s fuel economy.
And the day itself? I used to blog elsewhere about work. I don’t any longer. There are a variety of reasons for this; suffice it to say that my heart’s not in it any more. I got to work at 7.45am, put a smile on my face (to fool the public) did my bit (and far more; I was that bored), and eventually walked out again over twelve hours later.
Regular readers of this drivel may recall that two days ago I mentioned that I was egg-bound. The highlight of my working day today was sneaking a crafty fifteen minutes for a “Kapow!”on the chodbin with my Kindle during the late afternoon. (I wonder if I should add the chodbin to the “Dramatis Personae” list which can be accessed above?)

Meanwhile kiddies of today would seem to have exactly the same problems with their fangs as I have. My teeth are rubbish, and it’s commonly known that I am of a generation which ate far too many sweets, and the sugar has done for our teeth. Exactly the same is happening with the kids of today. But rather than having sugary sweets, they are having healthy fruit. “Healthy” – perhaps not. The acidic juices and natural sugars would seem to be just as bad as the sweet that I used to scoff.
Now proven equally bad, given the choice of fruit or sweets I know what I'd have...