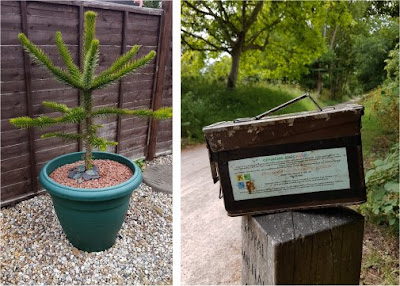 Ignoring a dog scrap and a trip to the loo in the small hours, I slept for eleven hours last night. It’s amazing what a night shift and an afternoon in the sun on the beer can do.
Over brekkie I pondered what we might do today. It is very unusual that I don’t have plans for a weekend day. We had thought about joining friends for a kayaking mission down the Medway, but that would have meant leaving the dogs alone for too long. "er indoors TM" had been talking about hiding a series of geocaches that she’d been working on, but that would have needed an early start. Simularly for all that I would have liked to have had a day trip to Brighton kite festival, by the time we’d fiddled about we wouldn’t have got there until the afternoon.

I then spent a few minutes fighting with Amazon dot co dot uk. On Friday I’d had issues with my sat-nav. I finally got the thing to work. Yesterday it worked perfectly when I used "er indoors TM"’s cable. So I thought I might get a new cable for it. Usually ordering things on Amazon is painless. This morning I struggled. Eventually it turned out that the cable I wanted was only available as an “add on” item. You had to buy it together with something else. So I ordered a different cable and found that I couldn’t have it delivered to the Amazon locker at work; that locker was full.
Hopefully the new cable should arrive at home in a day or so. If it works, all is fine. If it don’t I’ve only wasted three quid.

I went out into the garden and had a little potter. I ran out the hose to top up the pond, and I pulled out some of the pond weed. I then gathered up the dog turds and mowed the lawn, and trimmed back the overgrowth from not-so-nice-next-door before watering the pots.
After a couple of hours work it looked just the same as it did last week. Gardening is an ultimately futile exercise.
Interestingly I found what looks like hedgehog turds in the garden. Hedgehogs? I would have thought that they wouldn’t have come anywhere near what with the dogs.
I also spent a few minutes looking at my monkey-puzzle tree. It’s getting bigger and bigger. I wonder if it needs a bigger pot? I did notice that it had quite a few spider webs over it. The internet says that this is from spider-mites. The best way to get rid of spider mites is to zap them off with a high-pressure hose. It was a shame that I didn’t read this until *after* I’d put the hose pipe away. I spent a few minutes looking up monkey-puzzle trees on the Internet; no two people agree on anything about them. I think I shall just carry on treating the thing as I have done for the last four years. Since we got the tree (August Bank Holiday 2015) I’ve basically left the tree to its own devices and it seems to be doing well.
Its even got its own Facebook page.

We had some beans on toast for lunch, then took the dogs for a walk. A little while ago we’d got all the clues for a geo-puzzle in the Hythe area and thought we’d go find the final cache today. We couldn’t remember whether we’d got the clues earlier this year, or was it last year? According to my diary we found all the required information on 6 November 2016 (!)
We had a rather good little walk along the military canal, but for me it was rather spoiled by the miniature railway. Have you ever been on the Romney Hythe and Dymchurch railway? It stinks. It has a foul burned-oil smell that always makes me feel rather nauseous. And (it has to be said) it was a shame that Pogo couldn’t have been better behaved. Such a shame that he feels the need to shout at other dogs. Not all of them; just a random selection.
We found the cache that we were hunting for. Pogo and Treacle both jumped into the canal (I wish they wouldn’t), and we failed to find the first part of another geo-puzzle. Bearing in mind that people have been posting on-line that they thought that this first part of the puzzle was missing for over two years, our hopes weren’t high. With no finds in two years the thing must have been missing, and the person who’d hidden it must have long since given up with the hobby. We had a good search and could find nothing so I posted that it needed to be archived. Within five minutes the chap who’d hidden it posted that he’d archived it. What was that all about? Clearly he’d been getting messages about that cache. So why hadn’t he done anything about it over the previous two years?
We drove home via Dymchurch and via another geocache in Washford Farm. This is one I can’t find at all. I’ve been out at least once every two weeks for the last four months and had no joy. Both of us drew a blank today.

Once home I spent an hour or so writing up CPD. A dull job, but one which needs doing (from time to time).  I then slobbed in front of the telly until "er indoors TM" dished up a rather good bit of dinner which we devoured whilst watching “Dragon’s Den”. I quite like that show – everyone has a get-rich-quick scheme that simply won’t work…