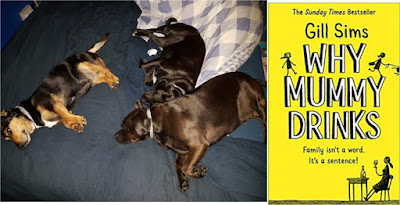 I went to the loo in the small hours, and when I came out I tripped over Fudge.  I know the way from bed to the loo and don't bear need the light on to walk it... but I rather assume that the dogs will be asleep. Fudge wasn't, and I didn’t see him. I fussed him a bit and he followed me to the stairs. He wanted to go up, and he knows that I will carry him up.
So I did.
I then spent a few minutes rearranging "er indoors TM" and the hounds so that I could have some space on the bed, and slept reasonably well for what remained of the night..

Finding there wasn't much milk I made some toast and scoffed it whilst watching an episode of "Good Girls". It's a good show, but today's was spoiled for me somewhat. A character was shot and was bleeding. Supposedly. Have you ever seen blood? Perhaps I see a *lot* more of it than most people, but it isn't bright red. It is a very dark colour. More dark purple or almost black. It certainly isn't cherry red. The chap with a bright red stain on his white shirt looked far more to be the victim of a leaking pen than he did to be the victim of a gunshot wound.

As I left the house I saw a new geocache had gone live not far from work. I say *not far* - it was on the other side of Maidstone from work. Had I left home when I got up I might have chased the First to Find, but the roads would be quite busy enough without trying to drive through central Maidstone at rush hour. Hopefully I'll have the chance of another this month.

As I drove to work the pundits on the radio were interviewing the presenter of "Women's Hour". Apparently the BBC have released figures about how much their TV and radio presenters earn. Jane Garvey (the presenter of "Women's Hour") has been pushing for transparency in how much radio presenters earn. She was happy to say that she gets one hundred and twenty-one thousand pounds a year for presenting "Women's Hour" five times every fortnight. And when I say "Women's Hour" you need to bear in mind that fifteen minutes of each show is a radio drama. So she's presenting for forty-five minutes five times a fortnight. Not a bad little earner. I would do that for a quarter of her wages. Perhaps the BBC might consider saving money by employing me.

I got to work and had a rather hellish day. During breaks I finished my latest e-book. “Why Mummy Drinks”  is one of the better books that I have read recently. I didn’t download the sequel – I shall save that. instead I downloaded another sci-fi book which (so far) seems OK.

With work done I came home, and "er indoors TM" and I took the dogs round the park. As we walked we met an old friend who was supervising the cubs doing their sponsored walk round the park. I’m feeling far too old to consider being a scout leader again; Di is over twenty years older than me and is still going strong.

"er indoors TM" boiled up a rather good bit of scran. We devoured it whilst watching the second “Bridget Jones” film. I rather lost interest after a few minutes…