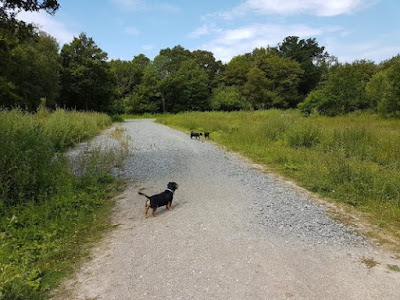 Over a bowl of granola I watched another episode of “Good Girls” in which our heroines again supposedly “did the dirty deed” whilst fully clothed. Not that I wanted to see them running round “in the nip”, but I wasn’t convinced they’d done anything at all other than wriggled and shouted a lot.
I then set off to Margate.

As I drove I listened to the radio. There was talk about how Jaguar Land Rover are planning to make electric cars in the Midlands. However for all that people are keen to make electric cars, no one seems keen to make the infrastructure to support electric cars. An electric car would be no good to me if I couldn’t charge the thing. This is a widely realised problem, but no one seems to want to undertake the expense of creating a nationwide (or world-wide come to that) network of charging stations. Local councils feel national government should get involved. National government feel it should be down to private enterprise. Private enterprises don’t want to undertake the financial risk, and feel that the public sector should get involved.
Meanwhile people remain very reluctant to buy a vehicle that won’t go very far, and journeys have to be planned from power point to power point.
There was also an interview with yet another apologist for Boris Johnson. After they had (again) been through the rigmarole of why Mr Johnson won’t appear on the radio there was a lot of talk about whether or not he had been denied access to security briefings when he had been Foreign Secretary.
Was he denied access? I don’t know. Possibly. I can’t help but feel this is just another attempt to smear him.

I got to Margate. "Daddy’s Little Angel TM" and I loaded up the car with assorted rubbish and we did a tip run. Margate’s tip is much like Ashford’s in that it attracts the nutters. Every tip I’ve been to seems to have one idiot with a bag of rubbish which he has to empty piece by piece; kissing goodbye to each scrap as it goes.
With tip run done we did another, and I dropped her off at the cash and carry. She needed to do a big shop and had arranged for a van to collect her stuff. Last Sunday’s little shop took two runs in my car.
I should really have activated my sat-nav right away; I took a rather circuitous route home via Dover (not through choice).

I collected the dogs and we drove down to Orlestone Woods where we had a little walk. Not as long as we might; Pogo and Treacle both walked out along a log over a pond then mistook pondweed for a hard surface and both fell in some rather stagnant water. From there they supddled in rancid mud, so we came home for a wash.

I had planned to go to Matalan and to mow the lawn, but time was pressing so I watched last night’s “Catch 22” as I scoffed a sandwich, and went to bed for the afternoon.

I then spent about an hour trying to program “Hannah” for tomorrow. It took some doing – the lap-top wouldn’t recognise the sat-nav. GSAK said to put “Hannah” into mass storage mode (?) After an age I activated Garmin Express and it seemed to work. I just hope I can get stuff back out of it tomorrow.
Perhaps the thing is poggered? It is now four years old and it gets intense use every week. I wonder how long they should last for? A new one won’t be cheap.

Hopefully "er indoors TM" will be home to make my tea soon, and then it will be time for the night shift. Hopefully I will have time to pop in to Matalan on the way. The lawn will keep for a day or so…