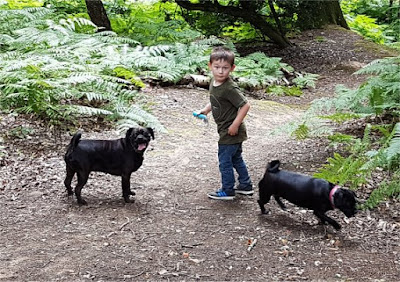 Yesterday I saw on Facebook that someone with whom I used to work was flying out to Longyearbyen. It is the world’s most northerly settlement of any type, and somewhere I’d like to visit. I was rather jealous.
As I had a cuppa this morning I saw that my ex-colleague had arrived there, but his luggage hadn’t. What do you do when you arrive in the back of beyond only to find your undercrackers have gone walkabout?

"Stormageddon - Bringer of Destruction TM" had stayed with us overnight. He and his grandmother came downstairs, and eventually we got ourselves organised. Quite a few of the family had stayed in the Conningbrook hotel after last night’s party, and we’d arranged to go have brekkie with them.
To be honest the full English wasn’t the best I’ve had, but It was good to catch up with family. It would have been good to have spent longer with them, but nephews had girlfriends to go see, and grandson was getting fractious. We said our goodbyes and went our different ways.

"er indoors TM" and I took littlun to the garden centre. We started off looking at the tropical fish; he was enthralled by the water snails. We then perused the pond fish and the water features before going outside to feed the ducks. The garden centre operates this racket by which you pay them to feed their ducks. For twenty pence you get a handful of duck food which is probably about one tenth of a duck’s dinner and which lasts about ten seconds. "Stormageddon - Bringer of Destruction TM" wasn’t sure if he preferred feeding the ducks or the carp in the pond, so we kept going until I had no more twenty pence coins left.
Despite not having any more twenty pence pieces I still had other money, and we bought toy cars and a torch on the way out.

"Stormageddon - Bringer of Destruction TM" announced that he wanted to go exploring in the forest (!) so from the garden centre we went home to collect the dogs, and then went on to the Warren. Littlun used his torch to peer into hollows and nooks and crannies in trees hoping to find bugs. Trees were climbed (by small boys and small dogs alike), and I even took a few photos too.

We came home for a cheese roll for lunch, then headed to Folkestone to take grandson home. We stopped off on the way at the Home Bargains shop to get Treacle a new bowl (her old one got broken this morning). Whilst in the shop we got some sweets.
We got back into the car to have grandson announce “I don’t like these sweets. You can put them in the bin!”
Bearing in mind he’ taken an age to choose what sweets he wanted…

With littlun dropped off we came home via Hythe and Westernhanger. Geocaching dot com is running a scheme over the next month whereby you can get e-souvenirs. We stopped off in Hythe where we found a rather novel cache which was rather obviously tied to a fence. It was a shame it was broken, but it was perfectly serviceable, and we got the first souvenir. We stopped off in Westerhanger and found another plastic pot which got us some way to the next e-souvenir.
Rather than hunting out more geocaches we spent half an hour in a traffic jam on the motorway and came home.

I spent an hour solving a geo-puzzle which is in the Arctic circle (I might get there one day) until "er indoors TM" boiled up some dinner.