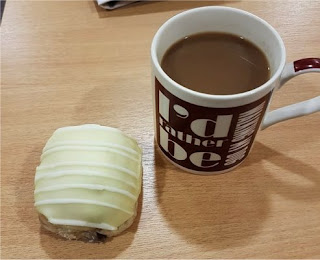 I slept reasonably well but was still up rather earlier than I might have been. Over brekkie I watched an episode of "Good Girls", then set off for work.

As I drove the pundits on the radio were interviewing one of Boris Johnson's henchmen. With only two candidates left in the race to be the next Prime Minister, one of them (Jeremy Hunt) is on Radio Four's news all the time. However the other (Boris Johnson) flatly refuses to appear. The chap who had agreed to be his stunt double this morning got rather angry with the constant questioning about why Mr Johnson wouldn't appear on the radio.
Eventually the chap was quizzed about Mr Johnson's pledge to increase the police force by some twenty thousand plods within the next two years. It was suggested that this would just be reversing the cuts he'd made when he had been Mayor of London, and there was a lot of hot air made by Boris Johnson's lackey to try to justify this. But no one seemed to want to address where these extra police officers were coming from. There is a world of difference between waving a magic wand to create a job, and actually being able to fill the position.

There was also talk of delays in the administration of antibiotics to patients presenting with sepsis at hospitals. This may well be an issue, but again the media was quick to pick up on any possible way to run down the NHS.

I got to work; I had my annual appraisal today. It seemed to go well; nice things were said about me. It was suggested that I begin to formally look into planning for retirement. I'm quite keen on that idea. I'm booked to go to a pre-retirement seminar in September.
Mind you I am *very* sceptical about the entire appraisal process; I can remember going through one (only a few short years ago) when I was told how wonderful I was, and how brilliant I was at my job only to be sacked (a few weeks later) for being supposedly utterly incompetent. A glowing appraisal carried no weight when faced with someone who is determined to stick a knife in your back.

At tea break I was given a Whitby Bun. Have you ever had a Whitby bun? It as rather good. If you could imagine a rather not-spicy hot cross bun with thick lemon icing and filled with lemon curd.
I rather liked it.

I did my bit at work; coming home was problematical. For no reason that I could fathom there were terrific delays on the motorway, and after half an hour of being near stationary, whatever the hold-up was just disappeared. I got home forty minutes later than usual.

Dinner, ironing, rubbish on the telly… soon be bed time.