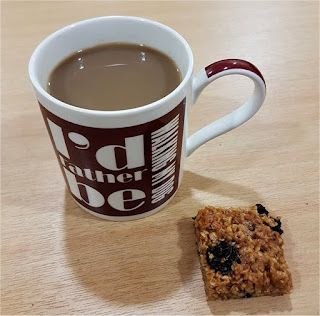 I went to bed feeling like death warmed up last night. But after a good night’s kip I woke feeling rather better.
I got up, and nearly tripped over Fudge who was fast asleep on the landing. When he saw me he started making odd squeaking noises. He does that, and Treacle does too. They really do seem to be speaking. I wish I knew what they meant.
I sat with him for a few minutes then got on with my morning round.
Over brekkie I watched an episode of “Good Girls” in which our heroes are getting deeper and deeper into the mire.

As I drove to work the pundits on the radio were interviewing the DJ Paul Gambaccini who (together with Sir Cliff Richard) was launching a campaign to change the law. Both Paul Gambaccini and Sir Clif Richard have had their reputations destroyed by baseless allegations of sex crimes despite no charges ever having been made against either. Both are pushing for a change in the law by which the accused are guaranteed anonymity until such time as formal charges are actually made. Is that *so* unreasonable?
At the moment there is nothing in law to stop all sorts of allegations being broadcast despite there being no evidence for them whatsoever.
There was also an interview with a woman who had recently taken her dying husband to a clinic in Switzerland where he was helped to die with dignity. It is patently obvious that the woman had done the right thing from a moral standpoint, but from a legal standpoint she is risking a prison sentence.
British law, eh? When my number is up, I want my plug pulled long before I become a burden. My grandmother took two years to die; towards the end keeping her alive was an act of cruelty.

I got to work; we had cake. I don’t know who made the cake, or why. But I ate it anyway.
As we worked one of the girls got rather miffed. A patient asked about her children. She replied that she didn’t have any children. The patient was sorry to hear that. My colleague explained that there was no need to be sorry; she had never wanted children. The patient immediately apologised because he didn’t realise she was a lesbian. Apparently the only women who don’t want children are lesbians (!) Apparently this is a well-known fact(!)
And this wasn’t from a bigoted middle-aged man – this was from a little old lady…

As the day wore on I had a flurry of messages asking about the dogs. The Ashford Facebook pages were awash with reports of dogs in our road barking constantly. I was sure it wouldn’t be my dogs; they just sleep during the day. And it wasn’t my dogs. One of those whinging on Facebook gave new-next-door’s address as the source of the noise.
There’s no denying that their dogs bark. But it doesn’t bother me (in much the same way that not-so-nice-next-door’s piano doesn’t bother me). All the time the neighbours are making noise they can’t complain about me.
"er indoors TM" popped round to tell them about the Facebook posts. The dog has fallen silent.
Mind you it amazes me that the keyboard warriors post all over social media, but not one will approach anyone who could actually do anything.