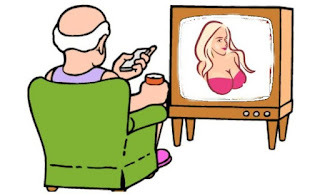 I was sleeping like a log when Pogo kicked me square in the nuts at three o'clock. That woke me with a start. I would have returned the favour, but he's had his removed. I managed to get back to sleep, and got a few more hours shut-eye.
I came downstairs to find Fudge guarding the front door again.

Over brekkie I watched another episode of "Another Life" in which the protagonists all kept the clothes on (for once). Much as I'm a fan of ladies running round in their undercrackers, in TV circles it is usually the last resort of a desperate scriptwriter and doesn't *really* make for quality viewing.

I left "er indoors TM" and the wolf-pack snoring and set off to work. Having had something of a heatwave over the last couple of days and having spent four hundred quid getting the car's air-con fixed, this morning was cold and wet. Far from needing the air-con, I had the hot air blowers on to de-mist the windscreen.
As I drove the pundits on the radio were interviewing some vets who operated in the west country and specialised in sheep. I listened for a few minutes, then turned over to my rather odd choice of music.

I got to work, and had a phone call from my brother. What with the heatwave and the storms that came with it, the flights to and from Spain have been disrupted. His Spanish holiday has been forcibly extended by (at least) four days. Apparently thousands of people are affected by this.
Personally I'd see that as something of a result, but he doesn't. I suspect that this, his first foreign holiday, will be his last.

As I left work I popped into the league of fiends (!) shop to get a flapjack bar. As I was paying, some silly old woman was whinging on about the rain “Typical British weather, no summer” she ranted. I quietly pointed out that just two days ago had been the hottest day on record. She had completely forgotten about that.

I came home to find "er indoors TM" had gone to Margate to visit "Daddy’s Little Angel TM", so I settled in front of the telly, and as the dogs slept I watched the last episode of "Another Life". That’s the entire series binge-watched in three days. It wasn’t too bad. I wonder what I can watch next?

"er indoors TM" came home and we popped to B&Q. She wanted a little garden table. It made for a nice birthday prezzie for her. Personally I think the thing will have rotted away and be in the tip by Christmas, but it should see out the summer. Hopefully.

We had a lazy evening in front of the telly. I’ve programmed “Hannah” for tomorrow. Maybe an early night? I shall guard my “tackle” tonight…