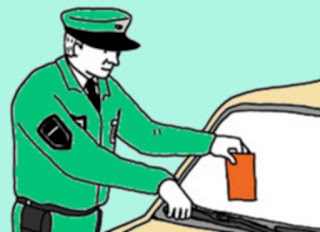 My lap-top took an absolute age to start up this morning. Being a Wednesday it had its usual little fanny-around to waste loads of time updating itself to end up seeming exactly the same as it was before.
Eventually I got the thing working and saw that Facebook was heaving with comments about the motorway being closed and heavy traffic on the A-roads. Google maps showed no problems at all. What was going on there?
I didn't want to get off the sofa this morning - Fudge was in a cuddly mood. That happens less and less these days. But I had to go to the hospital for a check-up as a prelude to getting my nose surgically re-bored.

As I got into my car I realised something was wrong - the car's fan would only work when on full power. I really should get that fixed soon.
As I drove the pundits on the radio were talking to the ex-Prime Minister Sir John Major who was being rather scathing about Boris Johnson. As this leadership race (for the leadership of the Conservative party) progresses it seems that there are no end of sensible reasons for voting for Jeremy Hunt (even though he wouldn't be my choice), and no end of sensible reasons for *not* voting for Boris Johnson. But it still seems to be a foregone conclusion that Boris Johnson is going to win.
As I drove I found that the roads weren't that busy at all. So much for the dire warnings all over Facebook.

I got to the hospital; I waited for my turn. After an age I was led into an office where they checked over my details. I pointed out (for the third time this year) that they had my phone number wrong, and then I went and waited some more. Eventually I was weighed and had my blood pressure taken. Apparently neither had changed since the last time they were measured. The nice nurse then spent ten minutes doing an ECG whilst telling me what a horrible place to work that hospital had become (!), and then I was sent on my way.
What a waste of time. Surely they could have done all that at my previous appointment?

If I'd had time I would have gone home and spent an hour walking the dogs round the park. But I didn't have that much time, so (bearing in mind what I'd heard about the motorway earlier) I took the A20 to Maidstone. I stopped off on the way for geo-purposes. One cache was found rather easily; the other not so. I had to scramble into a *very* overgrown thicket to find a tumbledown shack. It was quite the adventure; no one would know this shack was there. The cache... wasn't quite as described, but I found it anyway.
I then went on to work and did my bit…

…And now I shall take a little digression... In the past I was a cub scout leader (for thirteen years). I was reminded of one of the hundreds of children who I looked after today. This particular lad was a happy chubby fellow. On one hot day at cub camp he refused to drink squash as he "only drinks fizzy drinks" (we soon changed that). He was particularly kind to a lad with a paralysed leg. He was very keen with his camera. I took him with us on our trip to Canada and America in 2004.
"er indoors TM" came home to walk the dogs at lunch time today. She parked the car on the double yellow lines down the road from our house for thirty seconds while she collected the hounds. She came back to her car where she saw that ex cub-scout. He has grown up to be a traffic warden, and he'd given her a parking ticket.
No good deed goes unpunished...