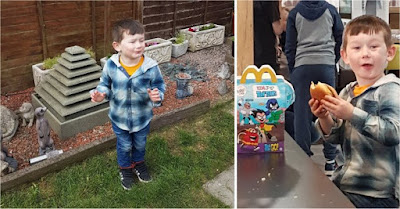 On my way to the loo in the small hours I somehow slipped at the top of the stairs. I didn’t actually fall down them, but I did manage to put my back out somehow. I went back to bed and dozed uncomfortably until "Stormageddon - Bringer of Destruction TM" woke screaming at half past seven.
He wreaked mayhem whilst I tried to have a bit of toast and some coffee. His grandmother tried to offer him all sorts of things for brekkie; he contented himself with a packet of Jaffa cakes, and had the hump because he wasn’t allowed to take a bowling ball up to the park. He then fed pine cones to Treacle until she was sick. All sorts of stuff she shouldn’t have eaten came up. That dog’s constantly chewing what she shouldn’t is becoming a problem.

I went out to the garden and spent a little while tidying up. Trimming the edge of the lawn, mowing the lawn, sorting out the overgrowth from not-so-nice-next-door. I then run out the hose pipe and started topping up the pond, and as it topped I sorted the shingled areas. The dogs seem to kick the stones everywhere.
"Stormageddon - Bringer of Destruction TM" came out and we spent a few minutes getting our fingers nibbled by the fish before putting out the new insect house. I suspect it won’t last long, but what do you expect for a fiver from Lidl?

We then went on a little shopping trip. Tesco for this and that, McDonalds for dinner, Matalan for trousers. It was rather hard work. "Stormageddon - Bringer of Destruction TM" would go from placid and happy to being full of rage and hysteria, and then back again seemingly for no reason whatsoever and at the flick of a switch.
I’m afraid to say that I don’t have the patience for any of that nonsense. I was glad to get home.
I left him and his grandmother, and took the dogs for a quick walk. We didn’t go far. Just to the co-op field where Pogo rolled in a dead slow worm. I wish he wouldn’t.
​​
I came home to find "Stormageddon - Bringer of Destruction TM" was hunting for bugs in the garden. He does that. We had a quick cuppa, then all played Lego for a couple of hours. Lego is good stuff. It’s a shame that one or two of the bricks have been chewed.

"er indoors TM" boiled up some dinner which some of us scoffed whilst watching “Mighty Mike”; a pug who now stars on the “Boomerang” channel. With dinner scoffed "er indoors TM" was giving scraps to the dogs in the kitchen when Pogo got over-excited, jumped, and landed on Fudge. Poor Fudge – he did scream. Looking at him it is so easy to forget about just how painful his back can be.
Fudge soon settled after his ordeal, and whilst "er indoors TM" had a shower, "Stormageddon - Bringer of Destruction TM" and I watched “Cats vs Cucumbers” on lube-tube (as he calls it) until it was his bath time.
I was well out of that. It sounded like he and his grandmother were having quite some fight in there. He’s currently physically stuck in the laundry basket. He climbed in and can’t get out. I’m not getting involved; my back still hurts.

It has been quite a full-on day…