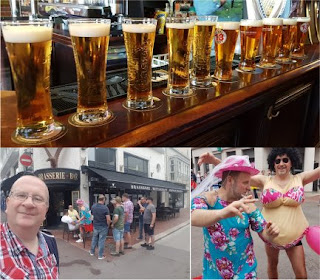 I didn’t sleep well. With all three dogs upstairs, space on the bed was at a premium. I eventually gave up trying to sleep and came downstairs only to have all the dogs follow me down. They don’t usually do that. And then I found out why. "er indoors TM" was going to the loo, and so her entourage had to follow. Most of them went back upstairs, but Fudge stayed with me in the hope of getting some crusts from my toast. He got some. A few years back I used to worry about giving him scraps as he was a little barrel, but now he’s getting rather thinner. I’d like to take him to the vet’s but he seems to be all right in himself, and visiting the vet’s does stress him.

I set off up to town where everyone had arranged to meet for brekkie. The County Hotel might not do the world’s best fry-up, but you can get a beer there at eight o’clock in the morning. Seeing how this was the start of the stag do for "My Boy TM" we thought we might start as we meant to continue. We started with the first fruit of my loin dressed as a banana, and that was pretty much how the day continued. Ten of us had a couple of pints (well… nine of us did as Andrew was driving) then we moved on to Tesco to get supplies for the drive. We all had a beer or two on the way to the services at Junction eleven where we picked up the last of our group (and had a tiddle).
From here it was only a short hop to passport control at the channel tunnel terminal. We were told we had a couple of minutes to have a quick look round the terminal. I got the beers in. But we had to rush them as le shuttle was loading. Still… we had more beer waiting for us in the minibus.

The channel crossing was a rather raucous affair. We were soon in France and having a tiddle in a lay-by somewhere off of the A16. Having a tiddle was something of a feature of the day.
It didn’t take long to get to Le Touquet, and once we’d dropped off our stuff at the hotel we went on something of a pub crawl. A banana suit gave way to a cowgirl costume, and beer gave way to more beer. As we drank we toasted passing hen parties and the gilet jaune rally (all twenty of them). We had lager and wheat beers and fruit beers. We had whelks and plates of oysters. We had pretty much every flavour of ice-cream known to science. Some of us ("My Boy TM") even had a little snooze.
Before it got too dark and before we got too “oiled” we went for dinner. I had steak… to be honest I was rather disappointed with it. I’d asked for rare and received charcoal. But it was OK.

With dinner dinnered things became rather vague. There were a *lot* of bars within a hundred yards of our hotel. I *think* I had drinks on the go at multiple bars as our groups divided and re-formed and went here and there. Trying to keep everyone together was akin to herding cats, and we didn’t try. I believe I even has Sambuca – and that doesn’t happen often.
It was actually pouring hard with rain by this point, but we didn’t care.

By midnight my nephew was clearly wilting. I was wilting too, but had managed to keep a brave face on it. Leaving the youngsters still drinking we went to bed…