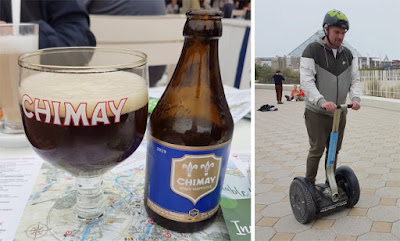 Our party had four rooms in the hotel. Our room had three beds. I’d very quickly bagged the single bed leaving my brother and nephew in the double bed. We were all very soon in bed last night, but everyone’s snoring kept everyone else awake, and everyone’s farting made everyone else giggle. We hardly slept at all.
At half past seven I sent a message to the communal WhatsApp group that we’d set up to see what time people were going for brekkie. By half past eight I’d not had a single reply so the three of us went for brekkie.
Brekkie was OK; croissants and pain au chocolate and coffee. I would have liked a fry-up but I’m not sure if my stomach would have thanked me for it. And the French don’t seem to go for a fry-up.

With no sign of anyone else in our party moving about we went for a little walk to try to get ourselves feeling a little more human. We wandered up to the beach where we found a geocache (can you believe it?) and came slowly back to the hotel via some local woods and a Carrefour.
Just as we were getting to the hotel we met some of our group. Those who had survived the night were “hanging” outside a little café. We joined them and “hung”. There was a *lot* of water and fruit juice being drunk. Anyone who has ever “hung” will sympathise.

Eagle-eyed readers might notice that I’d implied that not all of our party were present at this stage. One had gone shopping to get a replacement T-shirt (his T-shirt had been covered in some strange red concoction in an obscure night club in the small hours). And "My Boy TM" had been delayed following a minor episode with the gendarmerie. Having gone back to his hotel room at four o’clock in the morning he’d been unable to rouse his room-mate. He’d tried (unsuccessfully) to pick the lock of the door and having failed he decided to sleep in the corridor outside his room. There was however one rather major flaw in what he’d done… he’d gone back to the wrong hotel.
Eventually after being breathalysed, the French forces of law and order conceded that there isn’t actually anything in French law which prohibits anyone from sleeping in a hotel corridor dressed as a banana, so he was let off. I would say “let off with a caution” but as the police’s English was only marginally better than "My Boy TM"’s French, no one really knows what the gendarmes had to say on the matter.

Eventually we were all together, and we went for a light lunch. We found a rather good open-air café. I think the lads were rather taken with the chest of the waitress, but what do I know? Everyone ordered what they wanted. I wanted (and had) a chicken curry panini and a bottle of Chimay (9% abv).
From here we wandered up to the beach. One of our number had bought some French fireworks, and we amused ourselves blowing up the sand dunes.
Half of our group then went for a beer. Half of us hired segways. Have you ever had a go on a Segway before? They are great fun. They are basically a pair of wheels. You stand on them and lean forwards and it goes forwards. You straighten and it slows. We had a five minute session getting to grips with the things, and then segwayed round the town on them. Great fun. At one point the tour guide chap put out plastic cones and we had a little slalom race. I quite liked it – I hear you can hire segways at Leeds Castle. I’d be up for a session on them.

After an hour or so we joined up with the rest of our group for a pint. If you ever find yourself in Le Touquet, I’d recommend pretty much everywhere for food and drink *except* Jean’s bar. Admittedly my spoken French isn't perfect, but did the bar staff really have to show such contempt when pretending not to be able to understand me? And ten Euros for a pint of sour ale? The beer had gone off. Any decent cellarman would have realized this. Had this been in England I would have complained. But they had already made it quite clear that they were going to pretend that they didn’t understand me, so I contented myself with telling TripAdvisor about them instead.
I was rather amazed at the ten Euros for a pint bit. This morning eleven of us had had a sandwich or a panini or a snack as well as a drink, and it worked out at ten Euros each (for drink *and* food). It pays to shop around.

Having seen quite a lot of Le Touquet we thought we might have an hour or two in Cite Europe as it is very close to the shuttle terminal. We got there to find it was closed. Apparently Cite Europe doesn’t open on Sundays.
Pausing only briefly for one of our number to be sick (amazingly this only happened once all weekend!) we went to Burger King because… well… it was the only place which was open.

Yesterday’s shuttle crossing was a very high-spirited and lively affair. When we were half-way across the channel I woke up. Absolutely everyone in our group was fast asleep. The weekend had taken its toll.

It is a *long* time since I’ve been on a lads’ weekend. It wasn’t cheap, but it was fun. Must do it again…
Oh,  and there are photos of the weekend here.
Posted by Manky Badger at 8:58 pm