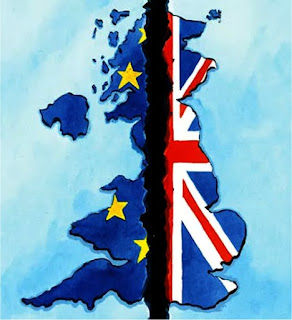 Despite a rather strenuous day yesterday I didn't sleep that well last night.  With all three dogs on the bed, space was at something of a premium. I finally managed to roll Fudge into a position so that I too could have some space, only to see that the alarm was about to go off. I got up and as I staggered to the bathroom I saw the freezer door was ajar. I thumped it closed hoping "er indoors TM" wouldn't notice. I hadn't left it open, but as this was something for which the dogs weren't responsible, I would get the blame.
I made some brekkie, and scoffed it whilst watching the latest thing on Netflilx. Bonding is about an American psychiatry student who makes money as a dominatrix, and who has dragooned her gay friend in to being her (unwilling) associate. The first episode seemed entertaining enough.

As I drove to work the pundits on the radio were discussing the results of last week's elections to the European parliament (which had been announced overnight).
For all that it is being seen as gauging the nation's opinion on Brexit, there was no clear message from the result. Nigel Farage's Brexit party would seem to have won most of the seats that were available for the United Kingdom in the European Parliament. But they only won because of the "first past the post" way in which the election was run. With UKIP dead on its arse, the Nigel Farage show was effectively the only pro-Brexit party. There were four different parties which were actively pro-remain. Together they polled more votes, but the votes were spread between them, and so no individual party could beat the Nigel Farage show. (Both the Conservative and Labour votes had collapsed into insignificance).
Mind you the (so-called) winning pro-Brexit party only got thirty-five percent of the vote. And the (so-called) losing pro-remain parties together only raked in forty per cent. So there is no really clear majority for or against Brexit. Especially when you bear in mind that less than forty per cent of the electorate could be bothered to get off their arses and waddle up to the polling stations anyway.
Those presenting the morning news wheeled on Nigel Farage for an interview. He came over as magnanimous in victory. He seemed quite reasonable in what he was saying. Mind you he did evade any mention of any policies other than sending them all back on the next banana boat. Mainly because sending them all back on the next banana boat really is his only policy. He hasn't got any others. And (clearly) for a large part of the electorate, he doesn't need any others.
Personally I feel that the public should watch him very closely, and should read more history. The Brexit Party *isn't* a political party. It is a cult woven around one person. Look at all the *really bad* leaders that have plagued human history. They all seemed to be rather charismatic and appealing when they first rose to power.

I got to work and did my bit as one does. And after a surprisingly strenuous early shift I came home to find "er indoors TM" wasn’t happy. She couldn’t find the peg bag. She’d spent hours looking for it. In retrospect I did myself no favours by finding it in less than a minute.
"er indoors TM" then vanished off on a mission to Margate to do "Daddy’s Little Angel TM"’s bidding. As the dogs snored I looked at the household accounts. As I’ve said a few times over the last couple of years, I’m far better off than I have been, but I would like to have *lots* more money.
I then watched Friday’s episode of “Jamestown” in which Jocelyn’s bosom was something of a disappointment.

"er indoors TM" returned, and shortly after "My Boy TM" came to visit. He’s got a new hat. I’m reliably informed that he paid a fiver for this hat. I think he was over-charged. One day I will be old enough to wear a hat like that…