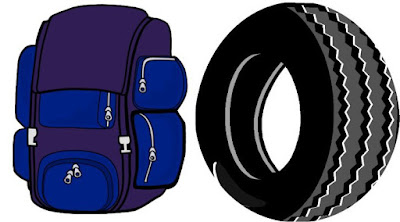 I was awoken by a frantic woofing shortly after three o’clock as excited dogs flew downstairs to greet "er indoors TM" who was back from her little holiday.
I said hello and went back to kip.

Over a bit of brekkie I perused the geo-map planning more adventures, Fudge emerged from his basket and lay on the back of the sofa watching the world go by.
With brekkie scoffed I drove out to Tyreweb. My car’s front tyres have been getting progressively more and more worn (as tyres do) so it was time to do something about it. I got to Tyreweb fifteen minutes before they opened and was first in the queue. The nice man took my details and the car key and said he’d make a start once they opened. By the official opening time there were half a dozen people waiting. I was right to have got there early.
I had a cup of coffee whilst I waited. I started to read my Kindle app, but soon found myself watching the antics of the feral children of the aggressive pikey-woman. She’d burst through the doors of the place and announced to the assistant that her “f..ing car’s f..ing tyres were f…ing f…ed, and could he f…ing fix them?” I got the impression that the poor chap didn’t dare say no. Having ordered repairs be done to her car forthwith she plonked herself down in the waiting room and bellowed profanities into her mobile phone whilst her feral children ran amok. They actually needed to be told not to climb on the displays, and seemed to be surprised when she screeched at them to “f…ing get down before I f…ing break your f…ing necks”.
The nice man soon sorted out my new tyres and fixed an issue with the tracking (whatever that is) and I came out two hundred pounds lighter. I got out as quickly as I could before pikey-woman realised I’d been served before she had.

I came home, and "er indoors TM" drove us all up to Reculver. The dogs needed a walk, I wanted to get a new rucksack from go Outdoors. The monthly county geo-meet was in Reculver today so we thought we could walk the dogs from there and come home past Go Outdoors.
The dogs got rather over-excited as we drove, and I’m afraid my piss boiled when I tried to get a ticket for the car park. The machine was dead simple. You stick the money in, you press the button, and the ticket comes out. Some idiot woman took ten minutes to do this; she was almost in tears by the time she got her parking ticket. The next one in the queue was equally stupid. And the next two weren’t even in the queue at all – they were just standing in line watching everyone else.
My life is too precious and too short to waste like this.

The monthly geo-meet was an open-air one. It was rather well attended. We didn’t stay long as Pogo was a tad fractious but it was good to catch up with old friends. And it was also rather good to go for a little walk along the sea front with the baby twins too.
From the meet we drove to Go Outdoors. It took an age as we had to drive through Canterbury. I always advise against driving through Canterbury, and again I reminded myself what a silly thing it is to do. But we eventually got to Go Outdoors. I saw the rucksack I wanted. It was already reduced, and with my loyalty card it was reduced even more. And they gave me another ten per cent off as well because I asked for it.
I say I asked for it – it is widely known in geocaching circles that if you are a member of the local group then you get ten per cent off of things in Go Outdoors. Or (to be more precise) it is widely known to everyone *except* the staff of the shop. I’ve asked for the discount many times, and every time I am met with a blank stare. I again got the blank stare today. The chap giving me the blank stare asked his colleague, who then called others over. Not one had heard of this discount, but they gave me ten per cent off anyway.
My receipt said I’d spent forty quid with them, and had saved fifty quid with all the discounts. I sometimes wonder how Go Outdoors stay in business.

We came home; I had a cuppa, then disassembled the fish-pond filter and scrubbed it all out. People see my pond which is rather pretty (even if I do say so myself) but what they don’t see is me with my arms up to the elbows in carp poo in the bath tub. The bath tub is a handy container for scrubbing the innards of the pond filter, but I had a minor mishap today. As I was scrubbing, the bath’s overflow collapsed. Presumably in the aftermath of having had the shower fixed the other day? It was easily fixed, but for a moment panic set in.
With pond filter scrubbed and reassembled I had planned to mow the lawn, but my back was aching, so I contended myself with harvesting the dog turds and called it a day.

"er indoors TM" boiled up some rather good mushroom soup which we scoffed whilst watching last week’s episode of “Young Sheldon” and a couple of episodes of “Junior Bake-Off”.

Pogo’s paw doesn’t seem to be bothering him after yesterday’s injury but there is a cut on the pad. I shall keep an eye on it…
Today has been rather busy.