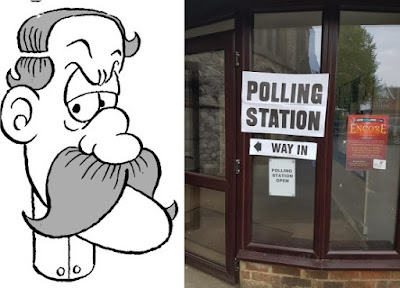 I slept like a log; over brekkie I watched the last episode of “Trailer Park Boys: The Animated Series”. It was rather good, but I’m now at something of a loss for what to watch over brekkie.

I then had a look at the Internet. Little had changed on Facebook really. I spent a few minutes looking at some of the local groups. Anger and idiocy prevailed in equal amounts. Some people go on social media to argue, others to express their ignorance. Such a shame… In many ways the Internet is just like the Babel Fish: by effectively removing barriers to communication between all sorts of people it has caused more squabbles and discontent than anything else in the history of humanity.

With no emails of note I went up the road to cast my vote in the local elections. Local elections aren’t like national elections. For the national elections I will need to think about what is best for the country. For the local elections I have to think about what is best locally. I had a choice of four candidates. I got to choose between wanton greed, well-intentioned incompetence, tree hugging and sending them all back on the next banana boat.
Blatant opportunism and naïve do-gooding wasn’t standing in my ward this time.
So… who to vote for?

Over the last few months I’ve had dealings with the Conservative candidate. Whilst at no stage in our correspondence did she actually say “f… off fatso”, that was clearly what she had in mind during our communications.
I seriously considered voting for the tree hugger, but every other candidate gave their address on all the election information. This chap’s address was “(Address in Ashford)” and his personal statement said he was “proud to be the youngest Ashford Green Party candidate standing in the local elections…. and works in the town centre in a catering role”. Had I not formed a mental image of “Johnny-No-Stars; the trainee McDonalds cook living in the dustbins behind B&Q” I might well have voted for him. The local Green Party have a serious problem with the image they project. “Victorian Dad” (out of Viz magazine) was standing in a nearby ward.
So who is left?
If we do send them all back on the next banana boat there won’t be that many workers left.
In the end I voted for the only candidate who had taken the trouble to come to my front door to ask for my vote. I don’t believe in democracy, so this was as good a way as any to decide who I should choose. I told the chap as much when I met him outside the polling station.
I can’t see why we needed elections today anyway. What was wrong with the last ones? (an argument which seems to be used far too much?)

As I drove to work the pundits on the radio were broadcasting from the University of East Anglia (for no reason that I could determine). They interviewed ex-tennis champion Martina Navratilova about her recent comments about allowing transgender women to compete in women’s sporting events. She described doing so as “insane and cheating”, and she went on record as saying: “You can’t just proclaim yourself a female and be able to compete against women. There must be some standards, and having a penis and competing as a woman would not fit that standard.”
Needless to say this had caused quite a bit of upset, and she had subsequently promised to keep quiet on the subject until she had done some research on it.  She’s now done her research… “and, if anything, my views have strengthened” she said.
She’s got a point… ​And so have those who disagree with her. Perhaps if those who were once men decided not to compete in events for which they clearly had an unfair advantage then this whole sorry mess might be cleared up?​

There was also talk of the ex-defence secretary Gavin Williamson. Having been accused of being behind the leak in the Huawei scandal, he's loudly proclaiming his innocence.
Did he do it? Was he innocent? The pundits on the radio were saying it was odd that a leak inquiry should ever actually come up with a finding. Personally I think the Prime Minister has thrown the chap to the wolves in a shallow attempt to bolster her own rather fragile position.

Despite heavy traffic on the motorway I got to Aldi in time for a bit of shopping. Jam, peanut butter, granola, armpit-squirt... I also got a little bug house too. The bird box in the garden is completely knacked so I shall replace it with a bug house.
I'm reminded of a chap who used to go to the snake club back in the day. He kept pall manner of insects in custom-made containers in the shed. The police called when his daughter told the teacher about her father's buggery.
I'm reliably informed that once it was all resolved they all had a jolly good laugh.

I had a rather odd day at work, and came home to find that "er indoors TM" had already walked the wolf-pack and was off out with her pals. Being “home alone” I took the opportunity to write up some CPD.

I think I shall see what I can find on Netflix…