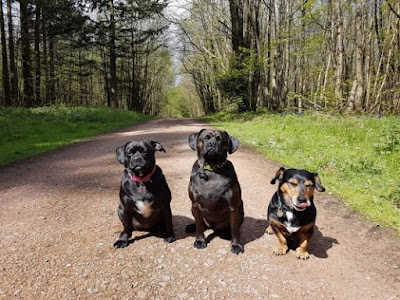 This morning’s Google Doodle was of Lucy Wills; the discoverer of the importance of folic acid in the human diet. I thought that rather apt as I’d spent much of the night performing a couple of hundred folate assays.
And with folate assays (and quite a lot else as well) done I left work and got into the car.

As I drove home the pundits on the radio were talking about the US-Chinese trade negotiations which aren’t going well. President Trump had declared a twenty-five per cent tariff on all new Chinese imports into the US, and the Chinese had implied that they may well reciprocate.
Trade tariffs are crap. If a company has to (effectively) bribe a government to allow its product into their country (where before no bribe was needed), it is simple economic sense to pass the cost of that bribe onto the end customer. All that President Trump has achieved is to put the price up for his own countrymen.

Rather than going home, I drove to "My Boy TM"’s house to collect the dogs. I had considered leaving them at home overnight last night, but had soon thought better of that idea. So I planned to take them for a sleepover with Sid, "Daddy’s Little Angel TM" and "Stormageddon - Bringer of Destruction TM". But the first fruit of my loin had offered to have them. That saved a sixty-mile round trip out to Margate.
When I collected them tis morning "My Boy TM" assured me that the dogs hadn’t been *too* badly behaved, but he did say that they had been rather excitable. Well… what did he expect? They had gone for a sleepover with Rolo – it was going to be like the first night at cub camp for them, wasn’t it? Mind you he wasn’t impressed that they hadn’t settled until eleven o’clock, and that they had woken him at six o’clock. He’d had seven hours’ sleep. I’d love that!!
However it spoke volumes that as I drove up, he was already standing outside his front door with all three dogs already leaded up and ready to go.

Bearing in mind that the dogs needed a walk, and also bearing in mind reports that a geocache of mine in Kings Wood had gone missing, we drove up to Challock to sort it out. The missing cache was seven tenths of a mile from the car park as the crow flies. And bearing in mind that there is no way that you could walk the straight line that the crow would fly, I thought a round trip of three miles would make for a good dog-walk.
And it did.
People who’ve walked my Kings Wood series of geocaches have commented on how quiet and peaceful the place is, and how you can walk miles without seeing another soul. We saw a few people (two) in the car park and (apart from the men doing the logging) we saw three others as we walked. It was a shame that one of them was officiously bumbling about with a clip board *very* near to where I needed to replace the missing geocache. I have no idea what this chap was doing, but he was trying to look incredibly dignified and impressive. I thought I might have a problem trying to stealthily replace the missing cache, but muddy dogs soon chased off the well dressed fellow in his three-piece suit (who wears a three-piece suit a mile into Kings Wood?), and it wasn’t long before the missing geocache was replaced.
I was going to say “let’s hope the punters are grateful”, but on reading what people write when they walk the Kings Wood geo-series I get the impression that they are.

We came home. By then the dogs were ravenous; I didn’t realise just how late their breakfast would be. And with them fed I went off to bed. I didn’t set an alarm; I always wake when I set an alarm. I thought I might just find out how long I could sleep. I slept for three and a half hours. I was rather disappointed by that.

I made some toast, and then got the ironing board out. I spent a little while doing laundry, and then thought about cleaning out the fish-pond filter. And decided against it. Night shifts are tiring, so I watched the telly instead. It don’t watch itself you know. “Lee and Dean”, “Santa Clarita Diet”… me and the dogs had kebab for tea.

I shall program “Hannah” for tomorrow and then I think an early night wouldn’t be a bad idea.