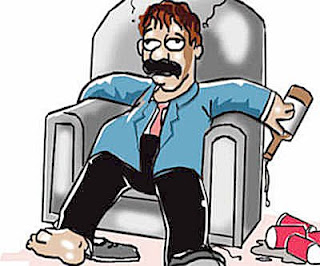 I slept like a log last night; but my nose does get very sore from the CPAP machine. After three or four hours it is rather tender. It was *very* sore this morning.
As I scoffed my toast Fudge sat on the sofa with me as we watched Treacle. Treacle usually pootles about doing her own thing and not bothering anyone *until* "er indoors TM" shows up. Then she is continually running off with stuff she shouldn’t have. She will ignore a bottle of perfume on the table for hours until "er indoors TM" comes along. Then she jumps on the table and runs off with it. And if there is no reaction she keeps showing off what she’s got and dabs people to provoke a reaction. It’s quite amusing really.

I sparked up my lap-top and had a look at Facebook. The photos from the weekend had got quite a lot of favourable comments, and I had a couple of friend requests from friends of friends who had seen them. I also had a friend request from a rather saucy looking young lady with a particularly epic chest but I didn’t respond to that (the friend request or the epic chest).
I sent out some birthday wishes, then checked my emails. Someone had logged finds on a geo-series that I archived months ago. Some people do take an age to do their geo-paperwork, but something seemed odd about this one. I had a look at this person’s geo-profile. They are a premium member of geocaching dot com (so they’ve spent money on it). But they’d supposedly found caches a hundred miles apart on the same day in April?
There are those who delight in policing other people’s geocaching finds. I wonder how long it will be before the geo-police get involved with this one?

I was wondering about where to walk the dogs today. In the end I went with our usual route round the park. Over the weekend a new geocache had appeared not far from the dog beach in the park, so walking there and back made for a good route. We got to where we were going; we soon found the cache. But as we turned to walk back I could see that Fudge wasn’t happy. He likes a circular walk. Walking somewhere then turning round and walking back really throws him. He always has a “WTF?” expression when we do that.
We were on the home stretch in Bowens Field when I was just thinking how well Pogo had been when an Alsatian attacked him. It was all shouting; he wasn’t hurt. The Alsatian just came from nowhere, pinned him down and snarled. I physically threw the Alsatian off of him and snarled at it. But the episode did for all the socialising training we’ve done over the past few weeks and months. Whereas earlier in our walk Pogo was ignoring other dogs or playing with them, he started woofing at them (obviously defensively). Oh well… such is dogs. I shall just persevere with him.

We came home and hung out one load of washing, then fed another load to the washing machine.  I loaded a load of rubbish into my car and set off on a tip run. I went via “Pets at Home” where I met an idiot. Sometimes it worries me that no one else seems to find these people. Have you ever been to “Pets at Home”? It is a huge self-service supermarket. I queued up at the tills to pay for my fish food. When the twit in front of me got to the till he pulled out his shopping list and announced his requirements. He wasn’t at all impressed when he was told where the various things were. He had no intention of going off and getting them, and felt that there was nothing wrong with everyone standing around waiting whilst the assistants went and got his shopping (whilst everyone else got their own). Presumably he used to go to the pet shop in the town centre which used to pander to the likes of him? (It closed last week)
Fortunately another till was opened to which everyone else went. The chap who had been working on idiot’s till announced that he was going on a break, leaving the idiot standing on his own.

I went on to the tip via two geocaches (that weren’t there). I got to the tip to find a new development. They now have local radio playing at deafening levels. I wish they wouldn’t.
Once home I hung out more washing and fed the last of it to the washing machine. I had managed to get the laundry basket empty. I like it when that happens. I scoffed a quick sandwich then ironed shirts whilst watching last night’s last ever episode of “Game of Thrones” which was nowhere near as bad as you might have thought it would be, bearing in mind just how awful the most recent episodes have been.

I did have plans for the afternoon. I did a bit of gardening (but only a bit) until the grey clouds put me off. I spent a couple of hours catching up on episodes of “Jamestown” in which Jocelyn’s bosom was rather obstinately not heaving in the slightest. Seeing that the forecast rain hadn’t happened I got a bucket of water and washed the bird turds from my car. They had accumulated somewhat.

"er indoors TM" came home and mopped the kitchen floor with her new mop and bucket which she managed to break on their first outing. She wasn’t happy.
Once she’d boiled up a rather good bit of dinner she went bowling. I watched last week’s episode of Victoria which tried to end on a cliff-hanger with Prince Albert collapsing. But bearing in mind that they had just walked out of the Great Exhibition (May 1851), history tells us that Albert’s good for another ten years.

It’s not been a bad day’s holiday today. I booked the day because I thought I might need it to recover from the weekend.
I did…