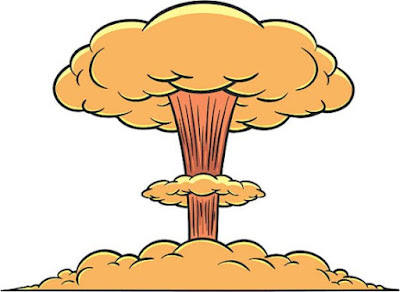 Last night I discovered “Santa Clarita Diet” on Netflix. I’d heard good reports of the show. Over brekkie I watched the third episode. It is “not too shabby”, as the first fruit of my loin might say.
Once telly was done I had a little look at the Internet. Several friends were off for a little break over the long weekend. I had a pang of jealousy. I wish I knew why – I’ve got stuff to do over the Bank Holiday weekend. But I’m still jealous of what everyone else is up to.
With no emails at all I got myself ready for work.

As I drove to work the pundits on the radio were talking about yesterday's local elections. It had been a terrible result for the Labour and Conservative councillors across the country. Hundreds have lost their seats on local council as the electorate turned to the smaller parties in protest about how the government has handled the Brexit debacle.
Which totally proves my contention that democracy is a stupid idea.
Local government has never had anything to do with Brexit. No local councillor has ever had any bearing on the Brexit process at all.  Basing any kind of voting decision for local government on Brexit (be it leave or remain) shows an utter ignorance of the entire political process. Blaming hard-working local councillors for the Brexit shambles is like blaming me for the pot holes in your local street. (i.e. absolutely no connection whatsoever)
There was also talk of the government's promise to retain the penny and two pence pieces even though (apparently) six out of ten coppers are used once then end up in a jam-jar somewhere.

I got to work and had a rather busy day. As I walked out of work I looked up the results of my local election. With a turn-out of less than thirty per cent I think it fair to say that the winner was apathy.

Driving home from Pembury took a while, but it was a pretty drive. I came home to find "Stormageddon - Bringer of Destruction TM" was already in residence. We played a little “Plunk” (until Treacle ate most of the marbles), he then wreaked havoc underneath the table, and he is currently feeding pretty much everything he can find to the dogs.

He seems happy enough. As do the dogs…