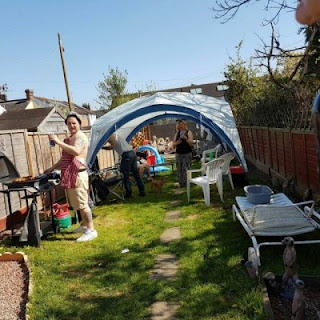 The puppy was particularly restless last night; I finally got more than half an hour’s continuous sleep, and woke to find that "er indoors TM" had abandoned bed and gone to sleep on the sofa downstairs. I got up and tripped over the puppy’s feeding bowl; it has become one of her favourite toys, but does it need to be at the side of my bed?

Over brekkie I saw a sign of our greedy times. "er indoors TM" had posted a picture of my dog on his Facebook page. Facebook itself had added a comment saying “This post is getting more engagement than 80% of recent posts on that Page. Boost it for £4 to reach up to 3,000 people”. Why would I want to be advertising pictures of my dog to people who have never met him and probably never will?

I spent a little while solving Greek geo-puzzles, then went round to B&Q to get some ingredients for the garden. I got there to find that the normal people were out in force. Having loaded up my trolley with heavy shingle it was physically hard work to keep stopping the thing because other people’s unruly brats kept running in front of it. After the fifty near miss I resolved not to try to stop it for the next brat. My suddenly stopping the trolley hurt; someone else could share the pain.
However it was at this point that the “delightful” mothers started to exercise some parental responsibility.

I came home, and spent a little while getting stuff set up in the garden. Back at Christmas we decided that once every couple of months we would have a family day when we all got together. We’d originally thought about having a Sunday roast dinner today, but having seen the weather forecast we decided to have a barbecue in the garden.
The fruits of my loins (and their associated entourages) arrived, and we had a rather good afternoon sitting in the sunshine. We vaped and drank whilst "Stormageddon - Bringer of Destruction TM" played in the paddling pool and Lacey and her mate lined up tin cans for us to knock down. Burgers, chicken wings, puddings, cheese… not a bad way to spend the afternoon.

I had intended to do all sorts of work in the garden today. I’ll do it another time…