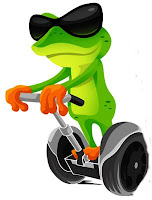 After having been wide awake for over an hour I gave up trying to sleep and was watching “BattleStar Galactica” at 5.30am. Today’s episode featured Ensign Ro (from Star Trek) being a rather dislikeable admiral. My viewing was interspersed with supervising the puppy as she committed various crimes, not least of which being running around the house trailing "er indoors TM"’s undercrackers as she went.
When the puppy finally went back upstairs to harangue "er indoors TM, I had a look at the Internet. It was still there, and hadn’t changed much since last night. I considered clearing some of the carnage that he puppy had left scattered around the living room but decided I couldn’t be arsed, and I set off to work.

On Monday I tried to get in to the cheapo petrol station in the ring road but it was closed. It was open today. I got petrol two pence per litre cheaper than Sainsbury’s but I think I’d rather spend a grand total of eighty pence more (per fill-up) to avoid the rather scary pikeys that haunt the cheapo petrol station. There was one chap there (the father of an ex-cub scout – he didn’t recognise me) openly attempting to charm his way into the affections (and pants) of the rather scary woman behind the till. Said scary woman never actually spoke to me or even acknowledged my existence as I paid for the petrol. Instead she brazenly led the cub’s father on.
Call me an old traditionalist if you will, but I’ve always felt that middle-aged women in the retail industry shouldn’t make their sexual availability quite so obvious.

As I drove up the motorway the pundits on the radio were haranguing one of the executives from Cadbury because they have supposedly dropped the phrase “Easter” from the events they sponsor at this time of the year.
It was all rather surreal; the chap on the radio kept accusing Cadbury of betraying their Christian roots by dropping the word “Easter” and the chap being interviewed kept asking where they got this idea from because it was all made up.

I got to work and my phone rang. It was Cheryl. Was I at work? She wasn’t feeling well and had booked a Segway session today. Did I want to go? Unfortunately I couldn’t get out of working today. I say “unfortunately”; I’m not sure that I really would have enjoyed it. Maybe I should have a go to find out.

I did my bit at work and came home. I’d had the car’s heater running on the way to work; I had the air conditioning running on the way home. Once home we took the pups round the park. The puppy generally ran amok, and Fudge found a left-over kebab. Generally business as usual for my dogs.
Once home we had fish and chips, and then I looked at the monthly accounts. I’m far from skint but I’m nowhere near as well off as I’d like to be. Is it so wrong of me to want to not have to count every penny? There are those who don’t have to…