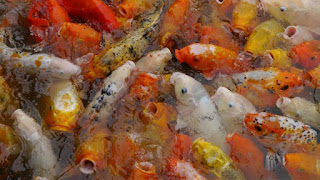 I thought I’d have a day off work today. The upcoming Bank Holiday is the only one that I’m not scheduled to be working this year so I thought I’d make the most of it. Not needing to be up for work I slept through till gone 7am this morning. I wish that happened more often.
I had a little look-see on-line; not much had changed overnight.

I drove round to collect "My Boy TM" and together we went to a friend of "er indoors TM". This friend’s garden pond had developed a leak. They’d decided that the leak was going to be too problematical to fix and had decided to do away with their pond and had offered us the fish. We were told there was about twenty pond fish…
We arrived, we set up buckets into which to put the fish, the first fruit of my loin borrowed a pair of waders and got in the pond with a net. I stood on the side of the pond and brandished a net from the safety of dry land. After about forty minutes we seemed to have caught all the fish that we were going to catch (along with three frogs) so we said our goodbyes and brought the fish home. We set up another bucket so’s we could have a look at what we’d acquired. There were some rather pretty goldfish, tench (green and golden), orfe, and several koi. We’d been told we’d be collecting twenty fish; we counted forty-six into my pond, and "My Boy TM" took a further eight to his pond.

Having started the day with one of the fruits of my loin I then went on to see the other. "Daddy’s Little Angel TM" and "Stormageddon - Bringer of Destruction TM" (and Sam) came with me to visit my mummy and daddy. They were well; they fed us lunch. I say “lunch”; "Stormageddon - Bringer of Destruction TM" just ate chocolate rolls.
We came home via Icklesham Koi, where I got some jollop to sort the froth in the garden pond. We also went via Ham Street garden centre for replacement water pumps for garden water features. They didn’t have any so we went to Bybrook Barn. They had some… but where I thought they were about fifteen quid each they were actually thirty quid each. I wanted three; I bought one.

Once home I mucked out the pond filter and applied the jollop. It seemed to do the trick. Apparently the froth is protein gunge from the left-over food I’ve been feeding the fish. I should feed them less.
I then disassembled one of the knacked water features. Moving a couple of dustbins of stones to get to the pump took some time and effort; but only took an hour. I was pleased to find that after a bit of cleaning, the water pump sprung back in to life. Re-assembly didn’t take more than half an hour, but once that job was done I gave up on my plans to fart around with shingle. Instead I fed the pond fish. I was pleased to see some of the new fish took some food.

"er indoors TM" came home and boiled up a rather good bit of scoff. We scoffed it whilst watching stuff from the SkyPlus box.
It was a shame I fell asleep half way through, but there it is. Today was rather tiring for a day off…