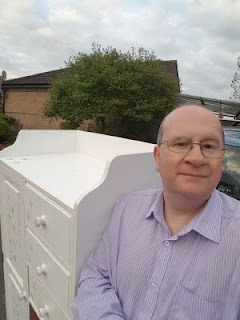 I slept reasonably well; but despite a rather late night I was still wide awake before 5am. Over brekkie I scoffed toast whilst watching “BattleStar Galactica” and combing my dog. These days he usually just looks at me from his basket, rarely getting up to come sit with me. I made the most of his soppy mood this morning.
As Fudge snored I had a little look at the Internet. Overnight I found myself in danger of becoming embroiled in a minor squabble in one of the work-related Facebook groups I follow. Someone had posted an article from curiosity dot com from a month or so ago. The gist of the article was that the lungs are a site of platelet production and this was presented as a major revelation. I commented that this is hardly news; I was taught this over thirty-five years ago.  However I found myself being lambasted by some woman who felt that curiosity dot com was a far more reliable and credible scientific source than any peer-reviewed journal.
I didn’t rise to her bait. This woman had clearly got confused between misunderstood Internet-based gibberish and proper science and took every attempt at a reasoned discussion to be a personal affront. I had a look at her own Facebook page; she seemed to be selling crystals for their healing purposes. I wish I’d known she was a looney *before* I read the rubbish she’d posted in what is usually a reliable Facebook page.

With no emails of note I got the fence posts out of my car and set off to Lenham. There was a breakfast geo-meet planned in Lenham at 8am, and Lenham is mid-way between home and work. It wasn’t massively attended, but I met up with a few friends, and there were some people from Zimbabwe who happened to be in the area with whom I talked about Wherigos for a while.
I then carried on to work. As I drove the pundits on the radio were talking to the Labour party’s spokeswoman on education. This woman was in the impossible position of trying to explain why the Labour party are utterly committed to the comprehensive education system whilst so many of the leading members of the Labour party openly send their children to grammar schools and private schools.
Apparently the Labour party is against grammar schools as there is no evidence that they help the poorer children. The Labour party annoy me. Whilst In theory it is such a good idea, in practice it is a spawning ground for idiocy. Take grammar schools for example. I know so many people who went to Hastings Grammar School who have gone on to do incredibly well for themselves financially.

The roads were quiet; I got to work with time to spare, did my bit and came home to run errands for the fruits of my loin. First of all I took "Daddy’s Little Angel TM" to South Ashford where we collected a wardrobe. As wardrobes go it was quite a nice one (if you like wardrobes). I took it back to her flat, then drove round to get Cheryl and drove out to her work where I collected two rather large artificial trees and then drove them home for her.
They made a nice mess in my car.

I came home to find a rather nice dinner waiting for me. As I scoffed it I had a text message. Where was I? What with wardrobes and artificial trees I’d forgotten that this evening was the wedding reception of an ex-colleague.
Woops.
Posted by Manky Badger at 9:31 pm