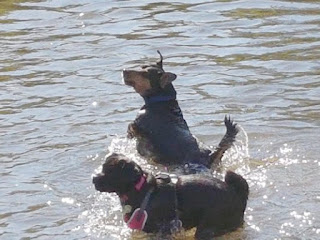 I woke feeling like death warmed up this morning. "Daddy’s Little Angel TM" phoned late last night to say that following a squabble, a friend’s daughter had run off. Personally I was of the opinion that she wouldn’t want to be found, but the police were involved already, so "er indoors TM" went to join the search. Bearing in mind I was working this morning I thought that walking the streets after midnight wasn’t a good idea, so I went to bed.
I got up three times because my dog was sitting at the front door howling.

I had some brekkie whilst watching “BattleStar Galactica”. Watching an episode every morning allows me to spot the many continuity errors. I then set off to work.
As I drove to work the talk on the radio was all about how Brexit would affect farmers and food prices. One farmer was saying how it was only the EU giving him cash bungs that kept him going; he claimed that if the EU subsidies stopped the shops would have to increase the price of lamb by twenty per cent to keep the farms in business. Another farmer was saying that the EU was costing him a fortune and he couldn’t get out quickly enough. Can they both be right?

I took a little geo-detour on the way to work, and also got some petrol. There was a dodgy five minutes trying to get past the turn-off from the A20 to Hermitage Lane as the traffic lights weren’t working, but I got to work without too much incident.
I wasn’t supposed to be working this morning but circumstances had conspired against me. Work was busy what with bonking and gassing (it’s a blood bank thing), but 1pm eventually arrived.
I set off to Charing where "er indoors TM" had organised the local geocachers into tidying up an area of woodlands. I intended to turn up late and then join in. I hadn’t read the instructions and turned up just as it was all finishing. I had a little walk round the woods with everyone, then we came home and took the dogs round the park. The dogs had a play in the river; I sat down, closed my eyes and fell asleep. I don’t know how long they were in the river; probably too long as Fudge did hobble home. He ges over-excited in the river.

Once home I fed the pond fish, watered my monkey puzzle tree and trimmed next door’s shrubbery. Now the jungle hanging over the fence has been massively reduced I’m trying to keep it that way. Interestingly one of the fence posts on “nasty next door”’s side has broken. That will be up to her to replace it, and she won’t be able to do so without trashing my gravelled areas. Perhaps she might have to speak to me to sort the problem. I wonder if doing so will cause her physical pain? I can only imagine talking to me must hurt her as she hasn’t done so in over ten years (certainly not since 2004).

With "er indoors TM" off on a mission this evening I had a few offers, but I turned them all down. I was feeling rather tired. An evening in front of the telly might just see me right. I might persuade the washing machine to have a go at my smalls at the same time…