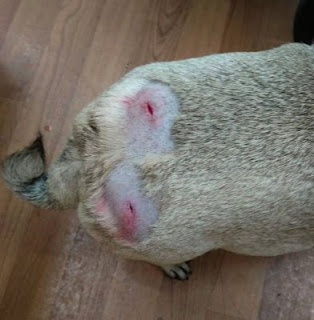 I was up with the lark (as usual) this morning. Before settling to breakfast I wasted ten minutes trying to find my dog’s comb. "Furry Face TM" likes being combed, but the puppy likes chewing his comb. She’d obviously stolen it to chew on it, and I couldn’t find it anywhere.
I then watched a rather good episode of “Battlestar Galactica” which was marred only by the supposedly gory scenes. Fake blood winds me up for the simple reason that it looks nothing like blood. Blood isn’t bright red, nor is it transparent.
I spent a few minutes perusing a dull internet, then went upstairs to get dressed. As I sat on the end of my bed to deal with socks felt something uncomfortable. The puppy had buried the comb under the duvet at the bottom of my bed.

As I drove to work I listened to the radio. There was an interesting article about the oil rigs in the North Sea. In much the same way that Britain’s nuclear power stations were built without a thought for their disposal, the oil rigs in the North Sea were similarly put in place with no thought for getting rid of them. Some may be dismantled but it seems there is a trend (world-wide) to use them as “reef-builders” which is a thinly veiled way of saying just leave them where they are when they are done with. It amazes me that (when they built them) no one gave a thought for what would eventually happen to these rigs.
There was also talk about how research has shown that in medieval times the recently dead had their bodies seriously mutilated to stop them rising from the dead.
I wonder who pays for this research.

I got to work and did my thing, then took over an hour longer than usual to get home. Road works not a couple of miles from work held me up for that hour.
I came home to rather worrying news. Poor little Sid (my grand-dog) had been attacked. "Daddy’s Little Angel TM" had been walking him round the fields at Newtown when an Akita savagely attacked him. Fortunately she had Buster (another grand-dog) with her and Buster was able to fight off the Akita (Buster loosing a tooth in the battle).
Needless to say the local police weren’t interested at first, but were eventually shamed into getting involved. They are apparently going to take statements tomorrow afternoon.
Some would say that is a day too late, but I’m rather amazed they are coming out at all. Personally I was of the opinion that they would wait until a child was mauled by this obviously out-of-control animal, and then pretend to have known nothing about it.
I wonder what they will actually do…