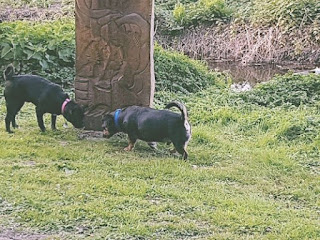 My dog spent the night next to me on my bed last night. I’ve been worried about him; I was glad to have him nearby.  However where he just slept, the puppy was restless all night. Does she *really* need to march all over my head all night long?

Over brekkie I watched more “BattleStar Galactica” then had a quick look at the Internet, Judging by the photos I saw there was a geo-meet last night. I wouldn’t have been able to have got along to it, but it would have been nice to have known about it.
There was also seemingly endless comment on social media about the Prime Minister’s announcement that she was calling for a general election in seven weeks’ time. Some people claimed to be sick of politics, and others seemed determined to deliberately give offence.
Bearing in mind the surprise outcome of the last general election and the Brexit referendum I’m intrigued to see how this election will end. At the moment the Labour party is in utter disarray and so it *looks* as though a resounding victory for the Prime Minister is unavoidable. And with such a victory she will be able to stage whatever form of Brexit she pleases without any credible objection from her critics.
Will she win? The Labour Party are currently little more than an unelectable bunch of well-meaning incompetents. The Dribbling Democraps are a spent force having abandoned any principles they might have had in 2010. Following the Brexit vote UKIP are a party without any raison d’etre. And bearing in mind that green policies are well established in all walks of life these days, have the Green Party *really* got a raison d’etre either?
But bearing in mind that a *lot* of people are regretting their vote to leave the EU, if any of the opposition parties make a policy of remaining in the EU, they might just win.

Meanwhile over on one of the Jack Russell Facebook pages I follow, some crackpot woman was trying to advocate a vegetarian diet for dogs on the strength that mushrooms are poisonous to dogs. If any of my loyal readers understand the logic of this one, please let me know.

I set off to work on a bright morning; the pundits on the radio were talking of nothing but election. I got to work and had a rather good day before coming home.
With "er indoors TM" preparing for Saturday’s CITO (it’s a geo-thing) I took the dogs round the park for a walk. We had a good walk up until the bit where the puppy went and sniffed at a drunk. The chap was laying on the grass and the puppy disturbed him. He got incredibly obnoxious about the puppy and then saw me. His attitude changed from belligerence to obsequiousness as I am rather bigger than the puppy (and bigger than him). I wouldn’t say he pissed himself in fear on seeing me, but he had clearly pissed himself at some point. I felt sorry for the woman with him; I couldn’t work out if she was girlfriend, daughter or carer. But whatever she was it was obvious she wished that she wasn’t.
I got the dogs on their leads and got away from him as quickly as I could. It was rather sad; he was variously trying to pick a fight with the puppy, trying to placate me that he wasn’t trying to pick a fight with the puppy, and arguing with the strange voices in his head.

As we walked home past the KFC, the puppy picked up a chicken bone. I wasn’t having any of that, and the puppy realised it. I hurried to pull the chicken bone out of her mouth, she hurried to get it eaten. She didn’t actually bite my thumb off, she realised what she was biting on just as she crunched down on my hand. For all that I play rough-and-tumble with my dogs it is easy to forget just how powerful their jaws are.