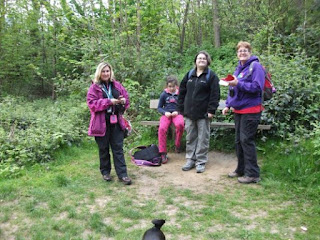 I ached somewhat as I got up this morning. Perhaps we overdid the fence work yesterday. The trouble is there is no easy way to move large lumps of concrete.
As I looked at Facebook over brekkie I was rather amazed at what I saw. One of the more racist people of my acquaintance was pretending to be Christian (he isn’t really) and was making great show of Easter being a Christian festival and wishing everyone a happy Easter, even those who aren’t Christian. What was that all about?

We got the leads on to the dogs and drove up to Scadbury Park in Sidcup. There are a series of twenty (or so) challenge geocaches there. A challenge geocache is pretty much identical to any other sandwich box shoved under a rock in the woods, but in order to be allowed to go hunt it you have to have qualified to do so. There is a challenge you must satisfy. Hence the name “challenge cache” (dur!) The challenges involved finding so many different sorts of caches on one day, finding total numbers on one day, finding total numbers of particular sorts, blah blah blah. I hadn’t really got out of my way to qualify for any of them, and I was surprised to find I actually qualified for all but two of them. During the last week I asked (on the local geocaching Facebook page) if anyone fancied coming for a little walk to find them today. Five of us set off on a rather good little walk. I say “little”; I’d thought it would take a couple of hours but the walk was closer to four. And we found a couple of Wherigos on the way. I took a few photos as we walked. It was a shame that I wasn’t quick enough with the camera to catch a picture of the fox and the parakeets.

We had planned to walk another series of caches in the afternoon, but time was pushing on and we got back to the car just as the rain was starting. Only light drizzle, so me and "er indoors TM" drove up to Sidcup walled garden to do a bit of sightseeing, scoff an ice cream and do another Wherigo. We had an entertaining five minutes watching the puppy watching a game of tennis; her head really was going to and fro with the ball.

Once home we visited the fruits of our loin to give out Easter Eggs. First of all we went to see "My Boy TM" who was having a problem in the garden. He’d hidden eight chocolate eggs in the garden for Lacey to have an Easter Egg hunt. She’d found seven, but the last one eluded her. And he couldn’t remember where he’d stashed it.
From there we went on to "Daddy’s Little Angel TM" and "Stormageddon - Bringer of Destruction TM" who were having a disagreement over some toy or other. I’m not sure of the details; as they squabbled so I fell asleep on the sofa.

We got home rather later than we might have done. I spent about fifteen minutes making one of my “compilation videos” – I just bodge together about a hundred blog photos and they make for a rather interesting (to some) insight to my world. I’m quite pleased with the result; you can watch it by clicking here.
"er indoors TM" boiled up a rather good bit of dinner before going bowling. Finding myself “home alone” I thought I’d watch one of the films Jose has lent me. I wonder which one I will choose…