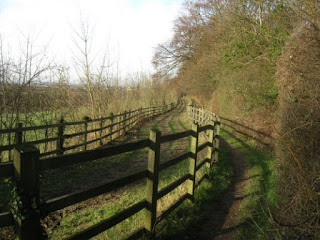 We had toasted hot cross buns for brekkie this morning. Following some utter drivel spoken in an episode of “The Great British Bake-Off”, "er indoors TM" was expounding the nonsensical notion that hot cross buns are a form of bread. She didn’t respond well to being told she was wrong… if they were bread what is with the currants?

We popped the leads on to the dogs and set off for Capstone Country Park. It was patently clear that the sat-nav was taking us the wrong way so we re-booted the software and started again. After a not inconsiderable squabble with the sat nav it turned out the sat-nav was right all along. Woops.
Mind you, having given me instructions of where to meet up, Karl went to the wrong car park.
We then had a rather good walk round Capstone Country Park. There were half a dozen geocaches there and (as always) they helped us find our way as we meandered about.

We walked for two hours then, finding ourselves back at the cars, drove half a mile up the road to the Waggon at Hale where the monthly geo-meet was taking place. We had a really good time sitting in the sun with friends. There was a small petting zoo for the kids (which fascinated Fudge), and the puppy generally made a nuisance of herself. I could have stayed there all afternoon, but after the third pint it really was time to make a move.
I slept all the way home, and once home we settled the dogs and went to Tesco to get the ingredients for a barbecue. That wasn’t cheap.

Home again, and I then spent an hour in the garden topping up the pond and cutting back the stuff hanging over the fence from next door. The overhang is nowhere near as bad as once it was, and regular trimming will keep it that way.

"er indoors TM" set off to the Saturday film night. I vaguely considered going, but decided against it. Instead I ironed seven shirts and a pair of trousers. What a riveting life I lead sometimes. As I ironed I wondered if I should have organised a game of cards for tonight…