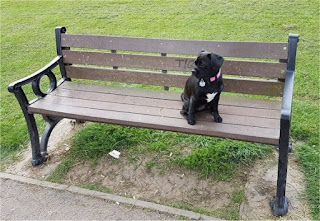 We had something of a shock last night; a friend from way back had died. I first met Glenn some twenty years ago, but over the years we’d grown apart (as you do). He was quite a bit younger than me, and the news of his death came as something of a shock. I was thinking about him only the other day; some time ago he’d written a short story and sent it to me to ask my opinion. I’d found the draft he sent me on my PC. I wonder if he ever got it published?

Over brekkie I sent an email to the Environment agency. It has been over a month since I paid them good money for a fishing licence which hasn’t appeared.
As I then looked at a rather dull Facebook "er indoors TM" carried on with the puppy’s homework. Treacle started puppy class last night and she’s learning to walk at heel and wait and generally not be a pain in the arse.
Perhaps I had unrealistically high expectations, and it *is* early days, but I’ve yet to see any real improvement in the puppy so far.

I took the dogs for a walk round the park. Fudge plodded along at his own pace; Treacle harassed the Jehovah’s Witnesses at the park gates. She also bothered several Ghurkhas. Ashford’s Ghurkhas amaze me. They are some of the most fearless soldiers you will ever meet, but they all seen terrified of the smallest puppies. Every time we go out I am apologizing to one Ghurkha or another who is quaking in terror.

We came home. I watered my Monkey Puzzle tree and I had a look at the garden fence between us and “nice next door”. It seriously needs a little work doing. I then cleared the garden of dog dung (a never-ending task) and hung out the washing. Having warmed up on my T-shits the washing machine was then set loose on my smalls. I wasted half an hour trying to find a tape measure, then set off on a little mission before work.

I went to Wickes to get some metposts with a view to sorting out that fence, then went to the garden centre I intended to visit yesterday. Notcutts in Maidstone has a branch of Cotswolds in it. I had a vague idea I might go there on shifts when I would once have gone to Go Outdoors or Wyevale in Canterbury. I don’t think I will be doing so. The place was rather pretentious.
Pausing only briefly to fail to find a geocache I popped into the nearby Costa for coffee and cake. I shant’s be doing that again. I lost count of how often I had to repeat my order (mocha and carrot cake) because the first assistant didn’t speak English and the second couldn’t hear me shouting over the noise of the music they were blaring out. I finally got a mocha and carrot cake. The coffee was crap, and the cake was wet. Not moist; wet. And the place was full of the most ill-behaved brats.
I found myself wishing I’d gone to McDonalds. So I did. Just for a McFlurry.

Work was good. It would have been better had the chap taking over from me at 9pm turned up at the hospital where I was working, not the sister hospital fifteen miles away. Oh well, I wasn’t *that* late getting home…