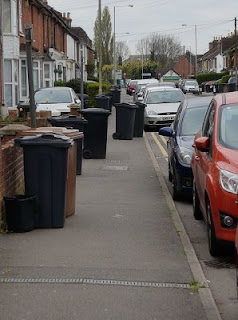 I woke about three hours earlier than I needed to today, and finding myself unable to get back to sleep I got up and watched more “BattleStar Galactica” before setting off to work. The pavements up our road were rather impassable as I left home. The bin men had been getting better, but it was rather obvious they didn’t want to work today and had made a point of blocking the pavements with the bins. I’ve emailed the council; I doubt anything will come of it though.
The roads were rather quiet as I drove to work. There didn’t seem to be many people other than me and the bin men at work today. For all that I do like my chosen profession, if I had my time again I would choose a job which puts up a “closed” sign from time to time.

As I drove the pundits on the radio were discussing Saturn’s moon Enceladus. The experts at NASA have recently announced that the place might harbour life. I thought that was common knowledge (rather like lungs and platelets!) but what do I know.
I had a bit of a chuckle at the “thought for the day” bit. The chap spouting the platitudes today was a “typical vicar”. In my experience nobody ever takes any notice of a “typical vicar” and so they can talk any old rubbish and get away with it because nobody is listening. This was certainly the case this morning; the vicar just spouted various non-sequitur platitudes. No sentence he uttered had any logical connection with what went before or came after. Does anyone ever pay attention to “thought for the day” ? What a waste of prime-time national radio.

I went to the petrol station to fuel my car. As I was filling the car someone who had just paid for her petrol got into her car, wound the window down and shouted very loudly and clearly at me as she drove off. “Your car’s vile!” was what she hollered. Both I and the woman at the checkout looked at each other and wondered what that was all about.

I got to work, did my four hours and came home. The original plan had been to fix the loose fence posts this afternoon, but "Daddy’s Little Angel TM" and her entourage had been diverted to Folkestone. We can fix the fence posts another time. Instead I went into the garden and replaced the broken fence panel. As I did I got chatting with “nice next door” and had a lager with them. Fudge wandered through (as though he owned the place) as I was removing the scraps of the old panel. And then the puppy got involved. But I got the job done and had a chat with our new neighbours too.
I then mowed the lawn and had a general tidy up. I carried on until my elbow hurt too much to continue.

I ironed shirts, then did some geo-homework in preparation for Sunday. And after a rather good bit of scoff I found myself falling asleep in front of the telly.