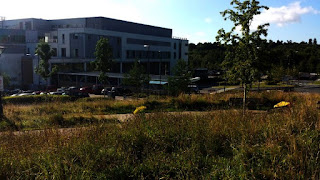 Yesterday evening I sat in front of the telly and kept nodding off when I wanted to actually be awake and watching stuff. Last night I slept for a bit, but was still wide awake far earlier than I should have been.
I know why I can’t sleep at night – the nasal polyps have returned. I can feel them blocking up the inside of my sinuses. But do I go back to the doctors? Having had my nose surgically re-bored was a major undertaking; only to have the things grow back. Looking on the various forums on-line some people have had the surgery many times, and each time the things come back quicker. Sometimes within a matter of weeks.

Over an early brekkie I had a cup of coffee. "er indoors TM" had brought a new kettle home after last night’s bowling. The old kettle had died on me. And then I had a look-see at the Internet.
In the past I’ve whinged about how much effort it is to write a Wherigo and how infrequently people do them… Last weekend a group of four people came all the way from Belgium to do all of mine in one go. This morning one of the chaps has emailed me asking if he can blag one of mine and if I’ll help him write one of his own.
Perhaps I might persevere...

I then drove out to Pembury hospital… I’d heard there was a vacancy at Maidstone hospital and I’d been lead to believe that not only did they pay more money that I currently get but they also give you a rather substantial bung for taking the job as well. Maidstone is about the same distance as Canterbury, and being motorway would probably be a bit more economical on the petrol. So I arranged to have a chat with the boss there. She was keen, but said to meet her at Pembury hospital. Apparently the hospitals at Maidstone and Pembury are all one unit. I got there thinking she’d said to meet at Pembury because she was working there today, but I got the distinct impression that the vacancy to be filled was at Pembury hospital.
Mind you I actually liked what I saw, even though I would just transfer at my current pay scale. I came out thinking I’d like to work there.
But then I had a think…
Why was I even considering applying for the job? I was looking to do the same sort of work for more money. The hospital at Pembury is twice as far away from my house, and has a major trauma centre. I wasn’t looking to do more work for less money (once the travel has been taken into account)
Oh well. If nothing else it was a mini-adventure.
I stopped off for a crafty geocache on the way home in Goudhurst. It would have been rude not to have done so.

Once home I took "Furry Face TM" for a walk round the park. As we went he barked at everyone and everything. He seemed to be in a very shouty mood today. He’s not been himself for a few days. I blame the heat,
With walk done I had a spot of lunch. I would have watched a DVD as I scoffed but the DVD player seems to have gone tits-up. Oh well. I can’t afford a new one just yet. If we want to watch a DVD we shall just have to play it from the lap-top via the ChromeCast. I suppose I’d better see if that works on this new lap-top.

Having scoffed lunch I had a look at the housekeeping accounts. The emergency fund isn’t looking that good at the moment. Every month I put a little aside for unforeseen household disasters. Like lap-tops going west, pond filtration systems breaking, fuseboxes needing replacing, walls needing re-plastering, DVD players going tits-up, that sort of thing. That’s five major disasters over the last few weeks; I’ve probably got enough in reserve to pay for one and a half of them. Hence my needing a job that pays better.

I then had a little go at the astro club’s website. Some time ago I had a rant that astronomical events are known years in advance; why doesn’t the website have a list of them. I’ve finally got round to putting that list up. I also tried to post up a guest article from a member, but that was a tad beyond me. I shall need some help on that one.

I then set off to work. Being on a late shift and having taken half a day off I didn’t need to be there until 4.15pm. It seemed rather odd showing up so late in the day…