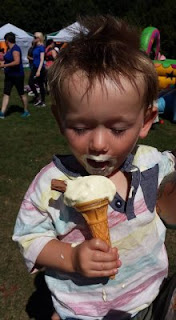 "er indoors TM" came home with a present for me last night; a water-filled pillow which would stop me suffering from the night sweats I get on an annoyingly regular basis. It was a particularly comfortable pillow, but I’m not sure it actually helped against the night sweats I had again.
My little dog was still fast asleep when I got up, and over brekkie I watched last night’s episode of “Dark Matter”. In this episode our heroes did that tired old story in sci-fi in which they meet evil duplicate of themselves. It is a regular theme in sci-fi; however having the same actresses playing good and bad versions of their characters can get confusing. So the viewer knows which ones are the nice ones and which ones are the evil ones, the evil female characters have their boobs hanging three-quarters out. You can’t tell which of the men are good or bad, but quite frankly with the amount of chest hanging out, no one really cares.

Over brekkie I saw that there were plans for an organized geo-walk round my series of geocaches in Bethersden. I’ve been meaning to do a maintenance run along that route for some time; maybe I might get someone else to do it for me? Here’s hoping.

I then drove my car out to the garage – it was due for a service. I left it with the nice garage man, and walked to Willesborough urban farm where I met "Daddy’s Little Angel TM" and "Stormageddon - Bringer of Destruction TM". The plan was to fuss the tame sheep, but the tame sheep weren’t having any of it. So we went back to their flat where Sam made us all brekkie. Croissants and jam was very tasty.
We watched a little telly then came back home. "Daddy’s Little Angel TM" and "Stormageddon - Bringer of Destruction TM" played in the paddling pool whilst I got camping gear out of storage and into the living room. And with gear ready to load into my car I spent half an hour pootling in the garden until "Daddy’s Little Angel TM" ‘s phone beeped. A friend of hers told her that there was a family fun day in Viccie park.

So we walked over to the park and had a wonderful time. The fun day was at the far end of the park; as we walked we met a few young mothers (friends of the most recent fruit of my loin) who were grumbling that there wasn’t any fun day happening. There *was* a fun day, but you had to go find it; it wasn’t obvious. It was right at the far end of the park where no one ever goes.
We had ice creams and sorbets and played in ball pools and on bouncy castles. There were side shows from the police, fire brigade, dog wardens and the Salvation Army. It was really good.
But it was hot.
So we retreated back to my back garden and the paddling pool for half an hour before going back to "Daddy’s Little Angel TM"’s flat for an ice lolly.

Whilst there my phone rang. My car was ready for collection. I walked to the garage to collect it. As I walked I found a two pence piece on the pavement. It didn’t really offset the (nearly) seven hundred quid bill. As well as a full service (and air-con re-gassing) I’d needed four new tyres and new brake pads.
Oh well, what is money for if not to squander foolishly?

The Rear Admiral arrived, and we loaded up all the camping gear into my car and drove it out to the Batfarm. I’ve not been out there for ages. The gear is now sitting in a barn waiting to be put to use.
I came home, and hopefully "er indoors TM" will boil up some dinner in a while.

And I’ll end today with a little update on my dog. For the last week he’s only left his basket when I’ve chivvied him out of it. Yesterday he started coming and going from his basket of his own accord. This morning he came upstairs to find me when I was getting dressed. He came out into the garden today with me and "Daddy’s Little Angel TM" and "Stormageddon - Bringer of Destruction TM" and even tried to hump Sid. This evening we even had a little walk. He’s still not quite fully recovered, but there has been a seemingly miraculous improvement in him which happened yesterday.
I have a theory.
Yesterday he did one of the most monumental turds I have ever seen. It was rock hard, about the size of a small bus, and had no less than four breather-rings along its length. I counted them! (For those of my loyal readers who are unaccustomed to the concept of breather-rings you can find out about them by clicking here. However I wouldn’t).
Perhaps that was what was keeping him down?