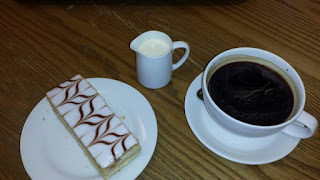 Apart from a quick tiddle at 3am I slept for over eight hours last night. I suppose that is the aftermath of two night shifts followed by two nights camping. The air bed I had for camping is currently awaiting the dustbin. In the past I’ve used a self-inflating mattress when camping but it has finally given up the ghost. It was comfortable enough, but it really only worked when on a flat surface. If the ground underneath it was uneven, so was it. I need to figure out my sleeping arrangements for next year’s camping. Air beds are all very well they maintain air pressure, but are a faff to inflate. I’m wondering if "My Boy TM" still has that cot thing he used to take on his weekend fishing missions.

I set the washing machine loose on some clothes, and over brekkie I watched an episode of “Game of Thrones”. A rather good episode; Nudey-Dragon-Girl kept her clothes on, but others didn’t take quite such a moral stance. And I was hanging washing out on the clothes line before 7.30am.
I then watched last night’s episode of “The Last Ship” as the washing machine chewed my undercrackers. The first two seasons of this series were really good; the search for a cure to a deadly world-wide plague. But the third season seems to have lost its way; it is now a cross between a political drama and an arcade shoot-em-up.
As the sun came out I went to feed the Koi. It was a lovely morning. I must admit that part of me wanted to be at camp. It would have been beautiful at the farm this morning. But it would also have been hard work, and I had other work to do today; and the tumble drier had done its wonders on my pants.
So I psyched myself up to go to work by watching an episode of “South Park” whilst sorting my undercrackers. I had hoped my washing would also have been dry before I left for work, but perhaps that was a little optimistic.

With a little time on my hands this morning I left for work earlier than I might have done and did a little shopping on the way. I stopped off at Chartham Garden Centre. The people in the aquatic shop there had been so good with the pond's new filtration system, so I'd rather spend my money with them than elsewhere. I've been after flocculent for some time; they'd always been expecting some soon. Until today. Today they sang a different tune. Apparently it is now the end of the pond season and they won't be getting any in until next year.  I didn't know ponds had seasons. I shall have to go elsewhere to get flocculent. It's a shame there's not that many pond shops about. But whilst I was in the garden centre I had a cup of coffee and a cream cake. I deserved it.
As I devoured my cake the women at the next table were slagging off a mutual friend of theirs. This friend was known to all and sundry as "Mrs Bra". Mind you, whilst I say "slagging off" the two old women weren't actually dishing much dirt on Mrs Bra. They merely would take it in turns to loudly shout "Oh that Mrs Bra" and then take a gulp of tea whilst the other would take a sharp intake of breath whilst looking shocked. It was all rather entertaining; I couldn't work out whether "Mrs Bra" was someone's actual name or a pseudonym, but whatever it was, it was being declared very loudly.

I then went to the cheapo-bargains shop and got cross with them. I wanted a new USB charger for my phone which would fit into my car's cigarette lighter socket. They had a loose one on the shelf. But no others. So I picked that up and took it to the till where I queued for fifteen minutes whilst the most hopeless till operative in the world dealt with the most troublesome customers in the world. When I finally got to the head of the queue the woman at the till flatly refused to sell me the charger, but instead rang her bell to call for assistance. Some spotty oik came over who took me back to the electrical section where he had just started stocking the shelves with boxed versions of what I wanted. I could *not* have the loose one. I *had* to buy one in a box. I *had* to queue up again. And as I followed the spotty oik about the aisles so my trouser pocket caught on a shelf in the shop and ripped open.
I rather lost my temper. I told spotty that I was going to spend my money in a shop that wasn't entirely useless and I went to Staples where I bought the same thing for twice the price.

Having ripped my trousers open I thought I'd go back to Go Outdoors and have a whinge. This was the second pair of these trousers I've bought from them that have ripped with minimum provocation. The knee on the first pair ripped open when I knelt on the ground when rescuing Sid from Singleton Lake.
The nice lady in Go Outdoors did giggle when I asked for a pair of trousers which wouldn't "go tits up if I so much as fart". She was rather apologetic, but apparently "going tits up" this is a feature of the "cheap and nasty" range. If I want trousers which won't burst open willy-nilly I need to spend a little more.
I've bought a pair of trousers costing thirty quid rather than a tenner; let's see how long they last.

And so to work. It was surprisingly busy…