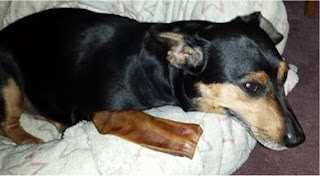 I came down this morning to find my little dog still dozing in his basket. He has been very sleepy over the last few days; I am sure this is the effect of the tramidol. I’ve also noticed that within an hour of his taking the medication he gets very breathless.

I scoffed my brekkie whilst listening to the noises emanating from my dog’s basket. There were some very odd squeaks and whimpers as he dreamt. After a while I chivvied him to the garden for a tiddle, and then he ate his brekkie – from his bowl – in the kitchen - *not* hand-fed whilst in his bed like it has been all week.

I also had a look-see on-line. I’ve had an offer of a walk on Sunday. Fudge won’t be going. He will rest (whether he likes it or not) but I’d like a decent walk.
There was also talk of postponing a trip to Wales which has been planned for early November. I’m in two minds about cancelling; although I’ve already booked the holiday I have plenty of other things on which I might spend my money at the moment. Mind you I’m a bit miffed about missing out on a day’s fun yet again. I missed the week at the geo-Mega, and I’ve missed every time that "er indoors TM" has taken her canoe out.

I saw that today was World Photography Day; there seems to be a day for pretty much everything, doesn’t there?
And I was pleased when I read a snippet of news this morning. One of the greatest disgraces of our age is the buy-to-let housing market. Over the last twenty years it has become increasingly difficult to buy a house. Successive governments have not seen houses as somewhere to live; rather as financial investments. Those with money buy houses and then let them to people who can’t afford the initial outlay for a house. However those renting the houses effectively pay the price of the house *plus* some profit to the landlord too.
It would seem that the new government is going to derail this gravy train.
I can understand how this may make things difficult for those who only rent out one house (a partner’s house, or one they inherited), but hopefully this will end the blatant profiteering of those who can afford to snap up houses purely to get rich at the expense of others.

The phone rang. Someone claiming to be called “Keith” was phoning from “the windows computer”. He asked how I was. I told he I was delighted he’d phoned as I had a wonderful offer for him. I gave him (as a one-time offer) the choice of “p*ss off” or “get knotted”. I don’t think he understood.

I then took "Furry Face TM" to the vets. He dropped an enormous turd outside the vet’s, and once he was weighed (a little more weight loss) he pulled like a train to get out of the surgery. And when he was called in I had a mini-fight with him to get him in to see the vet.
The vet agreed with me that his breathless spells and drowsiness are probably down to the tramidol, so she’s advised that we stop giving it *unless* he seems to be in pain. And he’s been discharged; I was rather pleased about that. Although far from one hundred per cent, he is greatly improved on what he was. I *think* that although he’s still quite poorly, a lot of his trouble is a combination of the tablets and his sulking.
So all that remains is to wait for the insurance people to stump up. Let’s hope they do.

We came home. I had intended to get the lawn mowed this morning, but I only got as far as strimming the edges before rain stopped play. So I loaded my car with that which I shall need for tomorrow’s geo meet instead. And then I solved a geo-puzzle and wandered up the road to get myself a sandwich for lunch. Whilst there I got some scoff for overnight so’s I wouldn’t have to brave Morrisons later. Morrisons on a Friday evening can be rather fraught.

Over lunch I watched the next episode of “Game of Thrones”; it was rather good. I then had an afternoon in bed before combing my dog to an episode of “Upstairs Downstairs”, and now I’m off to the night shift…