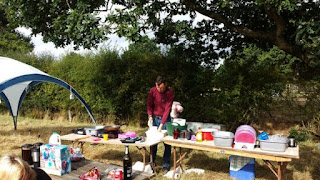 My airbed was utterly flat; I was trying to sleep directly on a rather lumpy field. I woke at 1.30am with the most excruciating stomach pains. It was wind; it was probably going to be a fart, but I wasn’t going to take a chance.
One of the things I don’t really like about camping is the toilet arrangements. I messed about in the darkness trying to find my boots, then staggered across the field to squat on a bucket only to find my suspicions were correct. It *was* only a fart. Mind you it was a rather impressive one at 1.30am. I’m not quite sure who gave it a round of applause but someone was clapping.

I went back to bed and dozed fitfully until 6.30am when I got up to go fishing. Jimbo soon joined me; he brought a cup of coffee with him. Sterling fellow! Perhaps it was rather mean of me to laugh when his stool then collapsed under his weight.
Fishing this morning was somewhat brisker than yesterday; we both lost count of how many we’d caught by the time we had to go back to camp for brekkie.

Brekkie was good; it always is at camp. I was about to start on the washing up when Tony offered to do it. I didn’t need telling twice, so we left him to it and went back to the pond for more fishing. We fished until mid-day. As for morning wore on so the fishing became slower.
We gave up, and wandered round to the pond closest to camp. Matt and Chris had cleared back the brambles and were fishing for bigger carp. And they’d caught some too.

We then sat about chatting for a while until lunch arrived. Bread and cheese sounds a very simple lunch, but bread and cheese in a field can be heaven on Earth. We then played with "Furry Face TM" for much of the rest of the afternoon. Bearing in mind how ill he has been recently I was in two minds about taking him to camp, but the little break seemed to have done him good. On Friday Batty had bought him a pig’s trotter and he’d munched it during the weekend. And this afternoon he was playing his own variation of “fetch” with whoever would play it.

It was with something of a heavy heart that I left everyone at 5.30pm. Camp carries on till tomorrow, but I really need a decent night’s sleep before work. I came home; much as I like camping, I like a shower and a real toilet too. And once scrubbed I had a look-see on-line. With very little power I’d been off-line for a little over two days. In that time I’d got one hundred and sixty one emails and thirty-seven updates on Facebook to say nothing of three friend requests and a plethora of messages. I spent ages catching up with what I’d missed then posted a few photos from the weekend.
I’m worn out… I’m off to bed.