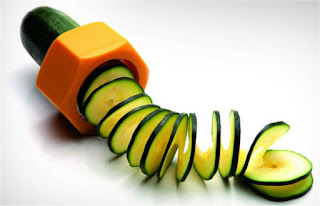 As I was getting some supplies for overnight in Morrisons yesterday evening an announcement came over the tannoy. They were suggesting that if customers made their way to aisle fourteen then they might get something for nothing. So I made a beeline for aisle fourteen where I was disappointed.
Some obvious fly-boy was giving the punters all the chatter. True to his word he gave out the freebie - a rather crappy plastic thingy that cuts cucumbers into helical shapes. Rather useless unless one wants a helical cucumber. Personally I've never wanted a cucumber in any shape. But having been given something for nothing I felt obliged to listen to his patter. It turned out he was trying to sell a novel hand-whisk. As hand-whisks go I suppose it wasn't too shabby. I would have paid a couple of quid for it. However he was knocking them out at what he considered to be the bargain price of twenty quid.
I walked away, taking my cucumber slicer with me.

I then had a look in Go Outdoors. I got talking with the nice lady on the shoe stall. She assured me that the shoes I'd bought from them less than three months ago shouldn't have fallen apart yet and suggested I might like to bring them back for her to send to the manufacturer.
I must admit that I was hoping they'd last more than a couple of months, but what do you expect for twelve quid?

I got to work, and did my bit through a rather busy and very warm night. As I worked the radio was spewing its usual blend of drivel. There was a Poirot play which totally failed to grip my attention; some drivel about motor racing (which was equally dull), and all sorts of other unmemorable stuff.
Mind you it was probably as well that they were unmemorable; they will all be repeated tonight and so since I won't remember them I won't realise it is all repeats.

"Daddy’s Little Angel TM" and "Stormageddon - Bringer of Destruction TM" were off swimming, so it was just me and my dog for our morning walk. Bearing in mind he over-exerted himself yesterday he had a shortened walk today; through the co-op field and back through the wetland park bypassing Viccie Park altogether. Mind you he still picked fights with some bigger dogs, tried to hump other bigger dogs, and found some fox poo.

Once home I scoffed brekkie and watched an episode of “South Park” that the SkyPlus box had kindly recorded for me, then spent most of the day fast asleep. I would have slept better had it not been such a hot day, but I’m not complaining. Reading social media enough other people are already complaining. Those whingers boil my piss.
We get days like today – a heatwave. It’s supposedly too hot. We get lots of days like today – so many people complain. We then get one day of rain and the same people immediately forget how bright it has been and are complaining about “typical British weather”.