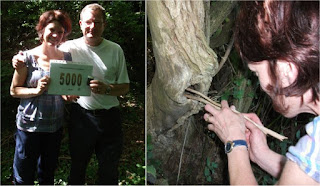 My mouth has been rather aching lately. During the week I’ve started using an electric toothbrush and I wonder if the thing might be a little too vigorous for my poor gob.

I got up probably about two hours earlier than most people would have done today, and was glad to see my little dog asleep at the foot of the bed. With "er indoors TM" off geo-camping he’s spent most of the week sleeping by the front door waiting for her to come home.
Over brekkie (which it hurt to chew) I had a look-see on-line. The Wherigo I created for the Welsh Mega seems to be being visited a lot. I suppose that even if I didn’t get along, at least I’ve contributed to it. And there was a job or two I might consider applying for as well.

I forced brekkie into a sleepy dog, and we got into the car and set off. Two minutes later we came home for a bandanna and then set off again. We met Karl and Tracey just north of Maidstone and got into their car and together we all set off on a little adventure. First of all to Shoreham toll bridge, and then into Wiston in West Sussex. The Wiston Wobble is a series of sixty-eight geocaches. Possibly rather ambitious, but we thought we’d give it a go.
We had a great time. Some of the paths were overgrown to the point of being impassable, but others gave us rather spectacular views. The South Downs were rather beautiful, and we saw several buzzards as we walked. Saw them and heard them too. They aren’t quiet birds.
And we even had a couple of pints in the Star in Steyning. Can you believe it?
Cache-wise the route was something of a disappointment. We ended up trying for seventy-two caches but failed to find four of them. And most of the ones we did find were rather mouldy and in need if a little maintenance.

We got back to the car rather later than anticipated, but that was not a problem. We then relocated to Copthorthe (near Gatwick Airport) where we had a rather good bit of dinner at a pub with the wonderful name of “The Curious Pig in the Parlour”. We shall definitely be going back to this place. We ate outside (with table service) – my fish pie and pavlova was really good. And Ringwood best bitter too.
We didn’t get home till 10.30pm. I took a few photos whilst I was out – it was quite late by the time I’d got them on-line.

I’m rather worn out….