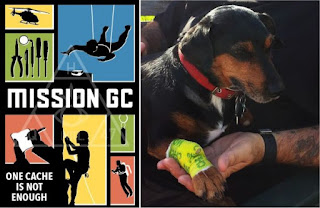 The best thing my dog could have had last night was a good night’s sleep, so I settled him in his basket and went to bed. I lay there listening out for him. I heard Rolo fidgeting and walking about, but I heard no cries from Fudge.
I came down at 6.30am to find Fudge seemingly a little better than yesterday, but still out of sorts. He had a little walk round the garden then took himself back to his basket. Over brekkie I watched an episode of “Top Boy” whilst worrying about him.

I hung the washing out, and thought Fudge might like a little walk. I showed him his lead and he didn’t look very interested. I put his collar on and he heaved himself up. I got Rolo’s harness on him and took both dogs to the car. Rather than jumping in Fudge tried to climb in and started crying. I went to help him and found his stomach was again rock hard. I immediately took Rolo back inside the house and took Fudge straight back to the vets where they again admitted him to dog hospital again.
This time I didn’t quite make it out of the vets myself before collapsing in tears.

I was supposed to be on night duty tonight. With both "er indoors TM" and "My Boy TM" away I knew I couldn’t leave him overnight. I did a little phoning round. A colleague offered to do my night shifts; that was *such* a relief. Covering shifts at short notice is difficult; an August weekend doubly so.

So I then took little Rolo on the walk I’d promised him. We went out to Kingsnorth. There was an e-souvenir to be had today for anyone logging a find on a multi-geocache. Multis start off with puzzles you do when out and about. In this case you go to the village sign in Kingsnorth, answer a few questions, do a few sums, and you end up with totally the wrong answer. You then swear a lot, realise that two plus two isn’t fifty-seven, do the sums properly and then go find the geocache. Whilst multis aren’t rare, they certainly aren’t common. In fact there was only one (that I hadn’t found) within five miles of home. So me and Rolo went for a little walk. I’d actually been to the village sign at Kingsnorth with "Daddy’s Little Angel TM" and "Stormageddon - Bringer of Destruction TM" and done the sums some time ago (February 4th to be precise) so all we had to do was go to where I’d calculated the thing to be hidden, do the secret geo-ritual, and come home again. We got to where I thought we were supposed to be, and after ten minutes of fruitless searching I suddenly spotted the cache. Obvious! Laying on the floor. I’ve put it back where I thought it should be. But I might be wrong…
We carried on with our walk. We probably covered a circuit of about a mile. Personally I would like to have gone further, but (for those of my loyal readers who have never met him) little Rolo is tiny. Probably a quarter the size of Fudge. He’s not built for long distances; he slept like a log after yesterday’s four miles. So we came home and I had a slice of cake with a cup of coffee whilst the washing machine chewed more laundry.

The vet phoned and said they wanted to keep Fudge until 5pm, so finding myself at something of a loose end I mowed the lawn then cleaned out the fish pond filter. As the pond isn’t as clear as it might be I put in some finer filter medium, turned it back on and watched the water leak out. I say “leak”; “gush” might have been a better description. So I turned it all off, re-assembled it how it used to be, and turned it back on. No leaks this time. I was rather pleased about that.
I then wasted half an hour cutting back more of the various climbing plants which pour over the fence from next door, then watched a little telly until 3pm.

Brian and Rachel had invited me to a barbecue. Originally I’d declined as I had thought I was going to be in bed prior to the night shift, but I thought that an afternoon in Brian’s garden might take my mind off of worrying about my silly dog. So I spent a rather good afternoon with family and friends in Brian’s garden until it was time to collect my dog.
The vet said he was much improved, but had been on stronger pain relief. I thought he looked spaced out. We went back to Brian’s and sat in the garden for five minutes but Fudge wasn’t himself so I carried him home. I put him down and he crashed out where he was on the floor. Eventually I persuaded him to go to the garden, and having done his business he staggered back to his basket where he snored for the evening.

Whilst my dog slept I did loads of ironing in between watching him sleep. He woke shortly before 10pm when I chivvied him outside for a tiddle. He walked very awkwardly; I blame the catheter which is still in his paw. I managed to slip one of his tablets into a bit of cheese and he scoffed it. I then hand-fed him all of his dinner. I shall probably be up with him most of the night…
Posted by Manky Badger at 10:16 pm