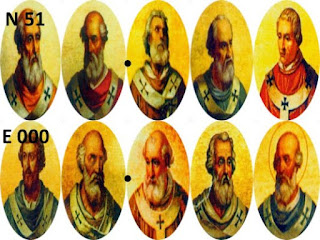 My nice new anti-night-sweat pillow failed for the second night in succession. I was rather disappointed with it. However having had a tiddle in the small hours I managed to sleep through till nearly 7.30am, which was something of a result.
Over brekkie I struggled (and failed) with a geo-puzzle. If any of my loyal readers can identify any of the people in the picture above I’d be grateful. I *think* the top centre one is St. Bismuth, and I’m not entirely convinced that the bottom right one isn’t St Anthrax.

"Daddy’s Little Angel TM" and "Stormageddon - Bringer of Destruction TM" came round and "Furry Face TM" got very over-excited. Bearing in mind his improvement (and his incessant shouting) we took him for a little walk round the park. He seemed to be OK as we walked past the Jehovah’s Witnesses, and he managed to summon up the energy to hump a passing Springer Spaniel. But I think he played in the river for too much and for too long. For all that he clearly enjoyed our walk, he was clearly flagging on the way back from the river, and was trembling when we got to the play park.
I picked him up, and he was as meek as a lamb as I carried him home.

Once home he sat quietly as I fussed him. With my dog settled I asked "Stormageddon - Bringer of Destruction TM" if he would like to feed the fish. A certain dog leapt up and went to terrorise the Koi, and shortly after he managed to growl at the postman.
He’s on the mend, we both just need to take it easy.

I then looked at the household accounts. Oh dear. Feeling somewhat flush a month ago I shelled out on a new lap-top and Microsoft Office and all sorts. It was nearly six hundred quid, but what is money for if not to squander foolishly?
Then the pond filtration system went west. I could either replace it (five hundred pounds) or leave the Koi to a slow and lingering death.
Fudge’s near-seven hundred pounds vet bill is hopefully covered on the insurance, but that will probably take ages to come through and the credit card people want paying now. And seven hundred pounds on a car service yesterday didn’t help much.
I’ve also got to re-plaster the back bedroom wall and replace the house fuse box.
I’ve come to the reluctant decision that I can’t afford the geo-holiday to Bath that I was hoping to do in November.

An afternoon in bed, and now I’m off to the night shift…