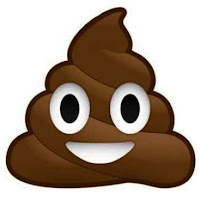 Poor Fudge was spaced out from the painkillers when I went to bed last night. I lay awake for much of the night worrying about him; eventually I came down to see him at 5am. Overnight he’d turned round in his basket which was a good sign. I chivvied him to the garden to do what dogs do in gardens, and then I hand-fed him his brekkie. He ate it all up, in the end feeding himself.
All the time little Rolo was running round feeling he was missing out on something.
I then had my own brekkie whilst watching “Dad’s Army”. The platoon was doing Morris dancing as a fund-raiser and Mrs Fox was wearing fleshings which (allegedly) wasn’t a pretty sight.
I then sent out a few emails inviting people to this coming Saturday’s geo-event, then set off to work.  "Daddy’s Little Angel TM" had promised to look in on my dog, but I was still not keen on leaving him.

Just as I was about to leave the house I gave my dog one final fuss. As I reached down to him I saw the two tablets I thought I'd got him to eat with his breakfast. They were neatly on the carpet in front of his basket. He'd spat them out when I wasn't looking. So I had little choice but to force them into his throat. Yesterday opening his mouth for tablets was quite easy. He put up a fight this morning; he must be getting better.

I set off to work a little earlier than I needed to; I'd heard the A28 was closed. It actually opened at 5am this morning so getting to work was plain sailing. As I drove the pundits on the radio were interviewing the boss of the fast food delivery firm Deliveroo. There is an attempt to stir up scandal in the media about how little fast food delivery workers get paid. Personally I can't see how it can ever be anything other than a low-paid job. Who is going to pay that much to have a take-away delivered? The pundits on the radio were trying to shame the delivery boss by asking if it was true that his firm expects their drivers to supply their own vehicles. The chap said that it was true; and made the valid point that if his firm supplied the mopeds the punters would never pay the cost of delivering a pizza. It was a shame that the chap then rather pissed on his own chips by insisting his firm’s commercial priority was to "refine their own business model" and other meaningless managerial buzz-words. Had he kept on speaking English he might have garnered a little more respect.
All I can say is that when "My Boy TM" delivered pizza he used the firm's moped. However he was doing it as a little earner whilst at college. He wasn't trying to make a living wage. When I was a lad there were a lot of jobs like that; pizza delivery, football pools, paper boy... all intended as a little extra for schoolkids and students. The idea of a minimum wage is all very good for "proper" jobs...

I then stopped off in Morrisons. I looked at the pears and decided to go back to bananas. I also bought a small box of chocolates for my colleague who had been on duty last night and from whom I was taking over. It should have been me on last night and she's covered for me so I could be home with my dog.

I got to work early, and had a rather busy day. But an early start made for an early finish. I came home to find "er indoors TM" was home from her trip, and my dog had done two poops in the garden.
In the great scheme of things having some poops from that dog is something of a result.
a
Posted by Manky Badger at 8:11 pm