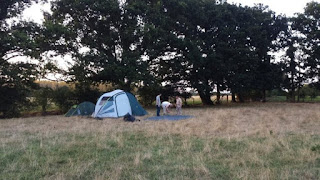 I suppose that really I should have gone straight to bed after the night shift… I didn’t. I loaded up the last of the camping gear I would need, and as I had my shower so the doorbell rang. Martin had got a taxi round with his gear. I told him off – I had every intention of driving round for him.
We loaded up Martin’s gear and drove down to the fishing tackle shop for some maggots. I used to swear by “Ashford Tackle”; in the two years since I last went fishing they’ve been taken over by “Angling Direct”. They probably could have been more rude and disinterested, but they would have had to have made a serious effort.
We then went on to Tesco for the makings of lunch, and then drove out to Smarden where I had a minor disaster. The idea was to use the cigarette lighter attachment of my power pack to charge my phone during the weekend. But as I unplugged my one and only adapter from the car it spectacularly exploded into about a dozen separate bits. Consequently power was at a premium, and I decided that as I was on holiday I would have a holiday from the Internet as well.

The idea was that we would get the communal tent “Brown and Smelly” up, then my tent, then I would have a little shut-eye. It was a plan which suited me. But we did it in reverse order. We got my tent up, then “Brown and Smelly”, and after a rather good lunch of squeaky cheese and a pint I found my head nodding.
I woke to find that Jimbo had arrived with the little dog he was looking after; I dozed off again and woke to find Terry and Irene were with us, I nodded off again and woke to find that "er indoors TM" had arrived with "Furry Face TM".

Terry and Irene had prepared a curry for tea. Oh it was good. I had seconds. And I dozed off again. I woke to find everyone else had adjourned to bed. So I too went to bed.