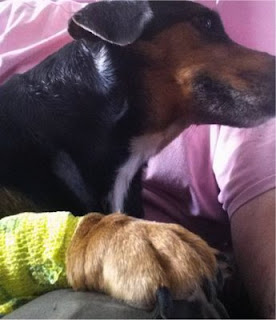 My little dog seemed to take a long time to recover from his ordeal at the vet’s yesterday evening. He was very subdued until "er indoors TM" came home and started ordering him around. He was his old self then, but as soon as she sat down and started watching telly he sidled up to me and snuggled all evening without moving. Mind you he did eat all of his dinner.
This morning I came down to find our house guest Rolo full of beans but Fudge sitting quietly by the back door. He slowly heaved himself up (clearly with great effort) and was slowly struggling toward the door when next door made a noise when they dropped their dustbin. Suddenly he flew down the garden barking like a thing possessed. And he was fine for fifteen minutes until I fussed him when he went back to being quiet and moody.
I *thought* he was still sulking. However he wouldn’t move. I went to pick him up and he cried when I touched his belly. It was rock hard. We went straight to the vets.
We got there over half an hour before they opened so I sat on the floor outside with my dog on my lap. He sat feeling sorry for himself and I sat blubbing like a baby. After a while the vet arrived for work and came over to see us. I pulled myself together enough to explain what was going on and they took us inside. We went straight into the examination room and they gave me the option of pain killers and waiting, or doing a proper investigation. Apparently they have to offer pain killers and waiting as a lot of people can’t afford vet bills. I asked the vet to do whatever she would do with her own dog, and Fudge was immediately admitted to dog hospital. I took a deep breath and managed to pay the bills and get out of the surgery before I started crying again.

Once home I realized I could either sit about fretting or I could do something. So I prepared “Hannah” with the co-ordinates for my new geo-series around Challock on which I’ve been working recently. Then I spent even longer getting the pots and stuff ready. I had intended to do all that last night but I had been fussing my dog instead. And with all the pots and stuff organized I took Rolo on the walk that I had been planning to take Fudge on. We walked for about four miles around Challock and hid twenty geocaches as we went. It was a rather pleasant walk; when we walked it two months ago the crops had made a couple of footpaths all but impassable, but the crops had since been harvested. Hopefully everyone should like it next weekend.
As we went my phone didn’t stop beeping with people sending messages of support and concern about my dog. Many publicly, and many privately. As we walked I blubbed a few times; not so much with worry for my dog but for the kind thoughts of so many people.

With our walk done we came home. I was in the kitchen just giving Rolo some water when I heard a rumbling crashing sound from above. I went to the back bedroom to find a huge area of plaster had fallen from the wall.
I took all the DVDs from the shelves which were above the affected area (in case the weight made more of the wall collapse) and piled them up. And left them there. I then tried to contact the insurance people. “Tried” being the operative word. I was passed between seven different people before I finally got to someone who took every conceivable detail. After what seemed like an age she “processed and validated” what I’d told her and she said that we weren’t covered. So I shall have to pay to have it fixed myself.
Do any of my loyal readers know any plasterers? Failing that how hard is it to plaster a wall?

I then made the final changes to the geo-series following this morning’s walk, then sent the entire lot in for review. It took a few seconds to write that sentence, and about an hour to actually do.
I immediately got the thumbs-down from the geo-feds on one of the caches I’d hidden as I’d mistakenly said it was in Yorkshire. Whoops!

Soon enough it was time to collect "Furry Face TM" from the vet. I was there early, and I did blub a little when the vet brought him out. When I left him there he was as meek as a lamb, when they brought him out to me he was pulling like a train.
They’d had him on fluids, done blood tests and X-rays. The blood tests hadn’t shown anything, but if anyone says that was money down the drain they have picked the wrong biomedical scientist with whom to argue. A negative result rules things out; a negative result is a useful result. The vet felt the fluids had perked him up. But the most helpful thing was the X-rays. They showed his entire alimentary canal was bloated. He’d got bunged up and had an awful lot of wind.
Five hundred pounds to be told my dog needed a good fart. Have I ever mentioned I never wanted a dog?

I had been planning to go down to be with the astro club for the Perseid meteor shower this evening, but I felt I couldn’t leave my dog. As he sat on my lap this evening he would periodically whimper and cry. I was on the verge of calling out the emergency vet when I realised that his whimpers and cries coincided with when I stopped petting him. Like any poorly toddler he was seeking attention.

I should really have done some ironing this evening; I just sat with my dog…